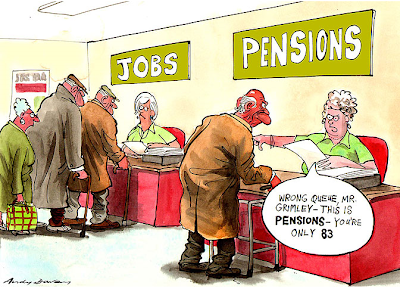 American International Group Inc. CEO Robert Benmosche created quite a stir last week when he suggested that to alleviate the growing crisis caused by lack of adequate funding for pensions in America and Europe the retirement age needs to be raised to 70 or even 80 years of age. Benmosche’s “reasoning” was that doing so would “make pensions, medical services more affordable” and “keep people working longer and will take that burden off of the youth."

Once again, we see a prominent business “leader” who is spewing nonsensical gibberish because he doesn’t understand that we have entered the Age of Limits. Benmosche’s mistaken assumption is the same one being made by politicians and economists all across the political spectrum—that sooner or later exponential growth is somehow going to return to the western economies and allow us to keep our unsustainable economies functioning as they have indefinitely.

Are pensions and government old age benefit plans like Medicare and Social Security in a dire financial crisis? Certainly. Is supporting the older generations in retirement one of the biggest financial burdens facing young adults these days? Absolutely. But here’s the problem that Benmosche seems completely blind to: if you raise the retirement age and force older adults to work longer, there will be even fewer decent paying jobs available for the younger generations.

I’ve made reference several times before to Laurence J. Kotlikoff and Scott Burns’s prophetic 2004 book, The Coming Generational Storm, in which the authors warned that the shrinking of the ratio between working age adults and retirees was going to cause a long term financial crisis in public and private retirement programs of every type. The book was published during the height of the go-go housing bubble years when for most people the idea of such a looming fiscal crisis was incomprehensible. A mere eight years later, thanks to the financial crisis of 2008 combined with the effects of peak oil and resource depletion, the Category 5 generational storm is coming ashore much faster than even Kotlikoff and Burns anticipated.

In America, the total number of jobs peaked in December 2007 and remains several million below that figure after a couple of years of anemic job growth. Even if the phony “recovery,” propped up by the insane easing and interest rate policies of the Federal Reserve and the unsustainable levels of federal government deficit spending, allows the economy to remain in its current state of aimless malaise and not crash again, it will take America many more years just to get the number of jobs back to where it was four-and-a-half years ago. Moreover, many of the newly created jobs pay far less and have fewer benefits of those that were destroyed during the financial crisis.

In the Age of Limits, raising the retirement age and reducing the number of jobs available for young adults would have a negative ripple effect all through the economy. Most importantly, the younger generation will not be able to afford to buy houses, thus placing even more downward pressure on an already cratering housing market. The young adults also will not be able to afford to buy much in the way of consumer goods, which is really bad news as the basic marketing strategy for most companies is to get consumers hooked on their products when they are young and make money off of them throughout their working lives. Even more ominously, already falling birthrates will become even more depressed as young adults, particularly the college educated, defer marriage and childbirth, meaning that an already critical demographic crisis will be exacerbated and the ratio of those of working age to retirees will fall even more dramatically in the future.

So what is the solution to all of this? The only way we could even hope to address this crisis is if everyone—young, old and middle aged—recognizes that we have entered the Age of Limits and that we all need to lower our expectations and greatly reduce our level of consumption and energy usage. At this time, however, I see no evidence that such a realization is ever going to take hold among any more than a very tiny fraction of the population. As a result of this lack of awareness and refusal to acknowledge reality, the generational storm is going to continue to increase in ferocity, and by the time it finally passes decades from now it will have completely washed away our unsustainable fossil fuel based way of life.
Posted by Bill Hicks at 6:57 AM