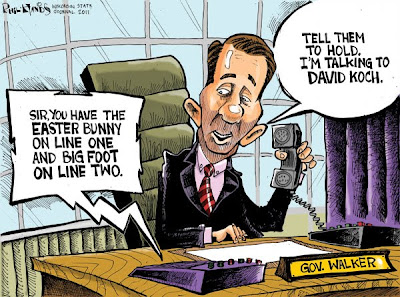 Congratulations, Wisconsin. Exactly 18 months after the protests at your state capitol that seemed to provide so much promise of a real challenge by the citizenry against the awful status quo in America, you are now right back where you started, with the odious Scott Walker sitting in the Governor’s mansion. All would be activists and Occupiers should take note: this is what happens when you allow your passion and energy to be channeled into the conventional political process. For even if Walker had been defeated in the recall election, the only real difference would have been that his Democratic opponent would not have been so ham-handed as to openly signal his intentions to fuck over the working and middle classes.

This sad state of affairs is going to continue until you accept one incontrovertible fact: that the Democratic Party may actually be a bigger enemy to your cause than the Republicans. At least with the Republicans you KNOW exactly what you are getting—openly slavish devotion to big business, war and empire. With the Democrats you get empty platitudes and a lot of sunshine blown up your skirt, but at the end of the day you still get an Afghanistan surge, Guantanamo, drone missiles, Wall Street bailouts, invasive airport scanners, a predatory student loan industry, crumbling labor unions, unbridled globalization destroying good paying American jobs and raids on medical marijuana dispensaries and part of the senseless and never ending War on Drugs.

Look at how on the national level Obama’s election has effectively muted protest against America’s ongoing wars. There hasn’t been a major antiwar protest in Washington since Chimpy Bush split town, despite the fact that Obama added Libya to the menu and dramatically ramped up the drone missile bombing campaign. If one were not paying attention, one might be deluded into thinking that President Hopey-Changey has actually done something to warrant having been awarded that Nobel Peace Prize.

The Wisconsin protests of early 2011, coming as they did a half-a-year before the Occupy movement took to the streets, were a real eye opener for many people as they focused the nation’s attention on a direct assault against workers being nakedly directed by the political stooge of a family of oligarch billionaires. THAT was the real issue, and was what really mattered, not the meaningless party label being worn by the empty suit pushing the policy. By allowing the Democratic Party to con them into putting down their signs and redirecting their efforts into the recall election, the protest movement has effectively wasted its time, to say nothing of the countless millions of campaign dollars that merely served to enrich the media conglomerates that provided the advertising time. Plus, it gave the Koch brothers an excuse to spend millions of dollars pumping out their pro-oligarch propaganda in a key state just a few months before a presidential election in which they have vowed to defeat the incumbent because they don’t think he kisses their pasty white asses often enough. Truly a Mission Accomplished all around.

Again, the lesson for the Occupy Movement could not be any clearer: do not ever allow yourselves to be co-opted by the Democrats. Treat that horrible party the same way you would the Republicans, as an enemy never to be trusted. They will just use you in an effort to win elections that have become all but meaningless in terms of change that might benefit the average person. Make no mistake, in our post-Citizens United dystopia the deck is very much stacked against you. The oligarchs have virtually unlimited funds to use against any politician who steps out of line and to utterly crush any viable third party movement. It’s the ultimate uphill battle, but it will always be even harder if you treat one faction of your enemies as if they are your friends.


Bonus: Yet another disaster hits the upper Great Lakes