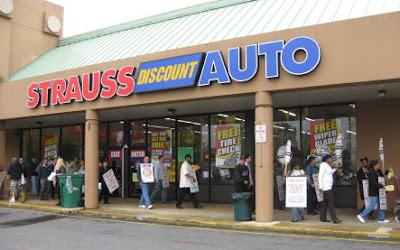 
Strauss Discount Auto, the 93-year-old company founded in Newark, has filed for Chapter 11 bankruptcy protection for the fourth time, closing all 46 of its stores, including 24 in New Jersey.

The troubled auto-parts retailer formerly known as R&S Strauss abruptly shuttered its retail outlets - including two shops in Wayne, and others in Bergenfield, East Rutherford, Lodi and Passaic - and filed its petition in federal bankruptcy court in Newark Tuesday. The company also dismissed 580 employees, according to the Chapter 11 filing.

On Wednesday afternoon at the Strauss Auto store on Route 23 in Wayne, two signs on its doors said, "This store is closed." The signs also advised customers with inquiries to call 800-787-4554, Strauss's regular customer-service line.

The recording didn't mention the Chapter 11 filing. It merely said, "You have reached Strauss Auto ... We are on the line right now attending to other calls, but want to address your issue." It then asks customers to leave a message.

In addition to its New Jersey shops, Strauss Discount Auto closed 19 stores in New York City metro area and three in Pennsylvania, according to the filing. Strauss president Joseph Catalano also explained some of the reasons for the company's latest financial woes.

"Increased power, gas and fuel costs have caused consumers to delay vehicle service and replacement expenditures," Catalano said in a filing. "Mild winter weather also resulted in a disappointing 2011-2012 winter selling season and a subsequent decline in spring business due to a lack of winter driving conditions."

One would think that with people not being able to afford to buy as many new cars and keeping their old ones longer that car repair would be a booming business. Not so much, however, if drivers are becoming financially tapped out. It's scary to think that many people are putting off vital maintenance and that their cars may thus be more likely to break down in heavy traffic. Chalk it up as yet another dire example of our crumbling transportation infrastructure.


Bonus: From my You Tube channel - another little ditty about driving