Spoiled Rotten Nation: Infrastructure Must Be Paid for Somehow 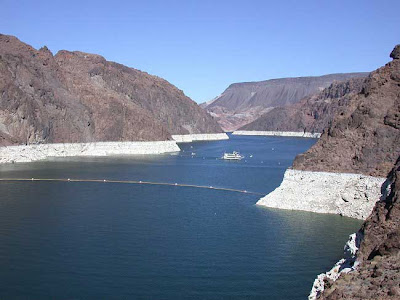 Every once in awhile, a news story comes along that perfectly illustrates the concept of what I call, Spoiled Rotten Nation: people want government services, but they don't want to pay for them. Here is a Las Vegas television station with the story of citizen outrage at having been asked to pay for the services they actually use:


Clark County Commissioners got an earful today from people who got huge water bills in May thanks to fees meant to pay huge bills for the Southern Nevada Water Authority.

At the emotional meeting, non-profit groups, small business owners and residents said they can't afford new fees for services they once got for free.

Homeowner Mary Jo Aldeman said, "I feel as though we're being raped."

Commissioners, sitting as the water district board, claim the public was informed about the new fees approved in February. But, it was clear from the impassioned outpouring that while most were aware of the five dollar hike for residential customers, many were not aware of new fees for fire lines and fire meters until they got new, huge bills.

Brian Aldeman, with the Las Vegas Chamber of Commerce said, "You're seeing a bill go from zero to 660 dollars if you have a 10 inch fire meter. That's a tremendous impact"

Small business owner Leslie Dunn said, "This new business that we're opening up? We've already had to cut one new position simply because of charge. This added four hundred and something dollars to the bill."

Matt Frady of Girl Scouts of Southern Nevada told the commission, "We have projected that our costs for these first three years will be 300 percent of our current water bills."

Water authority head Pat Mulroy said she understands the sticker shock, but the agency is stuck too.

According to Mulroy, "This isn't an extraordinary charge.Cities across the country charge for fire lines. They have to. It's too much of an infrastructure burden"

Fire lines and fire meters used to be covered by connection fees. Those fees disappeared when the economy tanked. But small business owners and non-profits say, their businesses will tank, and some residents fear they'll lose their homes, if they're forced to pay the water authority's $3-point-3 billion dollar bill for infrastructure costs, including a third intake pipe at Lake Mead.

To all those who are upset about receiving these bills, you really have a simple choice: pay them or stop receiving municipal water. Good luck with drilling a deep enough well out in the middle of the desert.

Providing you with the water costs a lot of money, and who else would you recommend pay on your behalf? You should actually feel grateful that it is your local government providing you the water at cost rather than some private corporation at a profit, because then I guarantee your bills would be a LOT higher than they already are.


Bonus: "There ain't no water here to be found"