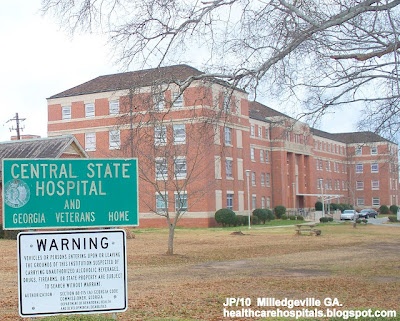 One of the few "bright" spots in the latest monthly jobs report was the supposed growth in health care industry employment. And yet, as I've posted here, there have been an awful lot of recent stories like this one from the Macon Telegraph:


Central State Hospital in Milledgeville expects to lay off as many as 280 employees in the next month as the hospital transfers out the last of its patients with developmental disabilities.

Tom Wilson, a spokesman for the state Department of Behavioral Health and Developmental Disabilities, said Friday the last 15 patients should be transferred to community care by June 30.

Central State Hospital will continue with a forensics unit that handles about 182 people with mental illness, and a nursing home that cares for about 138 patients, Wilson said.

The number of job losses could have been higher, but 80 employees at the historic state hospital left on their own in the last month as the number of patients declined, Wilson said.

“The number of employees has declined quite a bit in the past six months as we’ve been making this concerted effort, and the doctors and the nurses have gone to find other work,” Wilson said.

Central State Hospital’s total employment Friday was 1,439 workers, down from about 1,900 three years ago, said Kristie Swink, a spokeswoman with the Department of Behavioral Health and Developmental Disabilities. The layoffs represent about one-fifth of the remaining employees at the hospital.

Reading that last paragraph, I can't help but think that somebody's lying about the supposed boom in health care employment. Sadly, the article also included this little nugget:


Milledgeville Mayor Richard Bentley said the community is working hard to bring more jobs to the area. A public-private prison is about to expand, and the community has been looking at redevelopment efforts.

I've also posted multiple stories here about prisons across the country shutting down due to state budget cuts. But I guess Mayor Richard Bentley prefers to bury his head in the sand when it comes to inconvenient facts.


Bonus: "Forty Miles from Atlanta, this is nowhere...going to Georgia"