SHAME On Steven D. Levitt (or Freakonomics THIS) 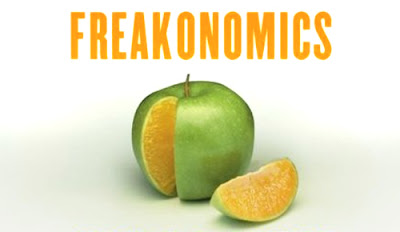 The second edition of The Exiled's new S.H.A.M.E. (Shame the Hacks Who Abuse Media Ethics) project is out, and this time they have their sights set in Freakonomics author Steven D. Levitt:

Named one of Time magazine's "100 People Who Shape Our World," Steven Levitt, author of Freakonomics, is generally assumed to be a harmless, quirky pop economist for trivia nerds. However, Levitt has a history of attacking teachers' unions, advocating for the privatization of prison labor, defending online gambling and occasionally crossing over the fringe-right line by promoting climate change denialism and, some have argued, racial eugenics. A dyed-in-the-wool Milton Friedman neoliberal from the same “Chicago Boys” network that brought you the "shock doctrine," Levitt’s idea of economics Utopia is a world in which "the market" solves all our problems and government is restricted to protecting property rights.

The rest of Levitt's depressing profile is at the link.


Bonus: "Don't tell me about politics when all the problems are economics"