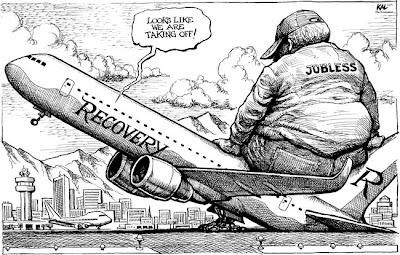 Last Friday’s Monthly Jobs report from the Bureau of Labor Lying Statistics, the first one to be released after the settling of the Republican nomination fight and the beginning of the general election campaign, could hardly have been worse for the sellout incumbent. Not only did the May figures come in at 69,000—nearly 100,000 less than expectations—but the April report was revised downward by 38,000 to 77,000. If you are keeping score at home that effectively means that even using the most positively biased figures the government could possibly come up with, job “growth” was well below what is needed just to keep up with population growth for the last two months, and that’s not even considering the strong possibility that the May figures will also be revised downward when the June report is released.

In a way, if one were to momentarily ignore his criminal foreign policies, one could almost feel a little bit of empathy for President Obama. For nearly four years, starting with his championing of the TARP law before his election when he was still sitting in the Senate, the Mighty O has done everything he possibly could to appease the banksters and Wall Street cretins who crashed the economy back in 2008. Moreover, ever since the mid-term elections returned a largely hostile Congress, he has been engaged in a fierce struggle to enact policies to extend and pretend the appearance of an economic recovery past this coming November. Now, however, like President George Bush the Lesser before him, it appears that Obama is going to fall a few months short of his goal. It is just his bad luck that unlike Bush it will be he himself and not his anointed successor who will actually have to face the wrath of the voters come Election Day.

It’s always possible that Obama and the collection of fools and charlatans that make up his economic team could pull one last rabbit of their hat and hold off the next major market crash for awhile longer, but the odds of that are looking worse every day. The biggest challenge facing the economy is the cratering of Europe, which could not be coming to a head at a worse time for the Obama team. Back here in the U.S., among other bad signs long term unemployment benefits are expiring, the housing market is turning down yet again despite historically unprecedented low mortgage rates, and student loan default rates are spiking—all indicators that the vaunted American consumer’s ability to keep the economic growth machine from sputtering completely to a halt is finally faltering.

Those of us who are peak oil aware should recognize that the most glaring indicator screaming out a bright red alert of an approaching crash has been the rapid plunge of oil prices over the past couple of months. On Friday, Brent crude dropped below $100 after touching $125 in March, while WTI plummeted to $83 after briefly topping $110 three months ago (remember those breathless $5.00-a-gallon gas by summer predictions that appeared in the mainstream media at the time? How silly do they look now?). Recall that back in 2008, after peaking in July oil prices began to plunge even before the stock market tanked in September and kept on going until they had cratered by more than $100.

Part of this most recent drop is no doubt due to the fact that oil and gas consumption in the U.S. has continued to decline along with the number of miles driven. It was reported recently that in many cities, traffic congestion has been reduced by 30%. Only an idiot (and there are plenty of them out there) would not recognize that however much of a positive this might be in the short term for those who often find themselves stuck in traffic jams, it spells disaster in an automobile-centric economy in which most people do not have access to public transportation. If “consumers” aren’t driving, they also aren’t going to the mall, to their local eatery or on vacation, where working and middle class people spend most of their discretionary income. It really is that simple.

Obama is also unexpectedly facing an uphill battle in terms of fundraising. Now that the Citizens United decision has freed the billionaire oligarchs to spend as much money as they want on campaigns through their Super PACS, a majority of them appear to be lining up behind Willard Mitt Romney, who is after all one of their own. Obama’s election in 2008 may have been the best thing that could have happened to the tycoons at a time in which popular anger against Wall Street had never been higher given how effectively he has deflected that anger and prevented any sort of accountability, but now that they have nearly complete control of the system thanks to Citizens United the ungrateful bastards appear content to let their compliant stooge twist in the wind. Witness, too, how a number of other top Democrats are shrinking like the craven little cowards they are and distancing themselves from Obama’s half-hearted attacks on Bain Capital.

So Bill, my regular readers might be asking, does this mean you are actually softening your strident anti-Obama stance?

Not in the slightest. If you are a liberal or a progressive, it is time to be realistic and recognize that there is really only one desirable outcome to this election, and that is having Romney not only win by a landslide, but bring a huge Republican congressional majority in with him. That way, when the economy completely craters during the next few years, as it will no matter who wins, they will own it lock, stock and barrel. Then one of two things will happen. Either a truly progressive political movement— hopefully one that takes the issues of peak oil and resource depletion seriously—will arise out of the ashes of the thoroughly discredited Democratic Party, or the reactionaries will be compelled to snuff out even the remaining façade of representative democracy in America. Either way, at least we will finally be rid of the rampant hypocrisy that has utterly immobilized the political left since the day the sellout Obama took the oath of office.