WTF Sunday: When the Going Gets Weird the Weird Turn Pro 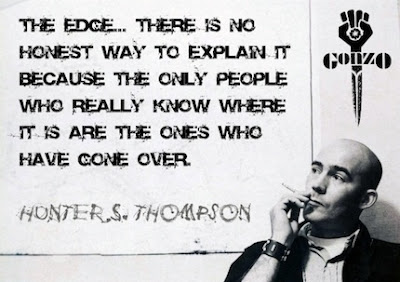 One of the dangers of writing a blog like this is making too much out of any one individual story and extrapolating it out as if it is some kind of sign that the final crack up boom of our decadent and depraved society is imminent. Nevertheless, in sifting through my usual Internet haunts this past week it sure seems like there have been far more than the usual number of, Holy Mother of Christ What the FUCK? stories appearing as of late. More than just the face eating "zombie" down in Miami, although that was fucking mind blowing enough even to me...and I've got a pretty damn twisted sense of humor.

Anyway, as a little departure on what is normally the quietest blogging day of the week, I thought it might be fun to link to some of the weirdest stories I've recently run across that haven't received as much attention as the South Florida Face Muncher. Most of these were courtesy of Gawker and Fark, two sites I make sure to peruse nearly every day. Like I said, I've got a twisted sense of humor.

@__SupaMcNASTY__ has since deleted his Twitter account; I have no clue if he was contacted by the police. But at least one other Twitter user says he did — @SeXXX_Symbol_, who wrote that "Somebody need to Abe Lincoln Scott Walker cave frog lookin ass."

But where @SeXXX_Symbol_ garnered attention, and apparently a visit, from the police, @DomoSoloDolo, or "FatBitchess&GoodWeed," author of the tweet "I wanna kill scott walker so fucking baddd!!!!!" seems to have been left alone. So was @Prototypeisgame, who wrote "Please somebody kill Scott Walker." (All have deleted their offending tweets. Neither @SeXXX_Symbol_ nor @DomoSoloDolo responded to my questions about the police.)

"His manhood or his ego was challenged and he said something along the lines of ‘I'll show you'," Gallagher told the local Daily News. "He thought he was clowning around, trying to shock the other party on the Internet site."


...according to police, while Mensch was sleeping on the floor of Ayers' rented room, Okrzesik was using her phone to Google how to kill her.

At 3:36, she sent another text asking another friend if he knew anywhere to get crack. (The friend responded "what hell no.")

3:38 -- Google search for "chemicals to passout a person"

Yahoo! Answers page opened: "Whats on those rags that make people pass out?"

3:42 -- Cracked.com article opened: "The 7 Most Insane Things People Have Done While Sleepwalking."

Blog post opened: "Ways to Kill Someone With Your Bare Hands"

That blog post was the last activity on Okrzesik's phone for the rest of the night. Police say Mensch was killed "minutes" later.

"I owe a lot to Wicked Pictures contract star Jessica Drake," Suleman said in a statement. "She opened up my eyes to a whole world of self-pleasure that I could never have imagined." Thanks a lot, Jessica.

Taco Bell announced last Friday that its Doritos Locos Tacos — that's a taco with a nacho cheese-flavored Doritos shell — has been sold over 100 million times in the last 10 weeks, becoming the company's most successful product launch ever.

The Pennsylvania man reportedly ordered his 16-year-old daughter to pack some clothes and a blanket and then drove her to the intersection of Cheltenham Avenue and Washington Lane in Cheltenham where he left her without a cellphone to fend for herself.

"She was devastated. She wandered quite a ways looking for help. Fortunately, she encountered a minister who stayed with her and called police," said Assistant District Attorney Cara McMenamin, who described the teen as "soft-spoken, extremely serious" and an aspiring classical pianist.

Dear Barack Obama, Please Fire the Cop who Arrested Me for DUI

Yesterday, (Amanda Byrnes) was officially charged with a DUI and since she sideswiped a cop car, attempted to flee the scene, and refused to take a breathalyzer, she can face a maximum of up to 6 months in prison. But since she’s famous, I mean there is “jail overcrowding,” she’ll probably go to jail for a couple hours and then do some handiwork at the County Morgue. Probably.

Anyway, this scared the crap out of Bynes and so she turned to the only law enforcement figure she knew of: The President.

Over 100,000 Public Elementary School Students To Get Bible Lessons On Killing Unbelievers

In a May 30, 2012 story in The Guardian, journalist Katherine Stewart, author of The Good News Club: The Christian Right’s Stealth Assault on America’s Children reveals that next Fall over 100,000 elementary school students in American public schools will receive explicit coaching on the scriptural justification for killing unbelievers, every last one – drawing on Old Testament scripture that, according to Pennsylvania State professor Philip Jenkins, author of Laying Down the Sword: Why We Can’t Ignore the Bible’s Violent Verses, has historically been used by the Pilgrims to justify slaughtering Native Americans, by Catholics and Protestants to justify slaughtering each other, and during the early 1990s in Rwanda, to justify killing Tutsis.

The genocide lessons – which emphasize that divinely-mandated instructions to kill unbelievers must be carried out thoroughly and without reservation, will be taught next year in “Good News” clubs in over 3200 public schools across America, by the Christian fundamentalist ministry Child Evangelism Fellowship.


On Monday night the DeWitt school board decided to take another look at a proposal that would cull huge trees, some that could be 200 years old, in order to plug a $43,000 hole in the district’s budget. The issue will be discussed at a budget hearing June 11, starting at 7 p.m. in board building, 2957 Herbison Road.

Even with the profit from selling the trees, DeWitt schools will still face a $777,000 deficit next year, according to finance director Rob Spagnuolo, and must balance the budget by June 30.

Superintendent John Deiter said after the meeting that, although he saw thinning the trees as a “conservation approach” that will “benefit the overall health of the area,” the budget deficit played a role.

“Our budget definitely is a factor in our decision,” Deiter said. “We’re a people business (and want to make) wise use of natural resources to benefit the most people for the longest time.”

The trees, already marked for removal by a licensed forester with whom the district has signed a contract, stand in the tree lot nearest the school board building.

“These trees are absolutely unique in the state of Michigan, larger than those at Fenner Arboretum or MSU,” retired teacher Larry Arbanas told the board. “Please reconsider cutting them down for the price of a school bus.”

Phil Harner, also a retired teacher, said the tree lot is integral to DeWitt hands-on science classes and cautioned that loss of the canopy provided by the tallest trees will greatly affect everything that grows underneath.


Fish and Game officials in California's Nevada County were alerted by passers-by to a man allegedly attempting to unload a pair of bear cubs at a local gas station in North San Juan Wednesday afternoon.

"I've never seen anything like this in the State of California," remarked Department of Fish and Game spokesman Patrick Foy.

Chris Puett told investigators the cubs' mother had charged toward him on his property and he was forced to shoot her.


A 35-year-old North Carolina woman was arrested last weekend for allegedly castrating a man with her bare hands, according to the Shelby Star.

The woman, Joyce Maxine Gregory, is accused of forcibly “squeezing a man’s testicle out of his scrotum” after the two got into an altercation early Saturday morning. The 59-year-old man told police he went outside to call 911, at which point Gregory came after him and grabbed him by the scrotum so hard it resulted in castration.

Police summoned to the scene found Gregory inside the home where the altercation had occurred, and immediately arrested her. Once inside the police car, however, Gregory reportedly removed her pants and urinated on the backseat.

So, what will NEXT week bring? Stay tuned.