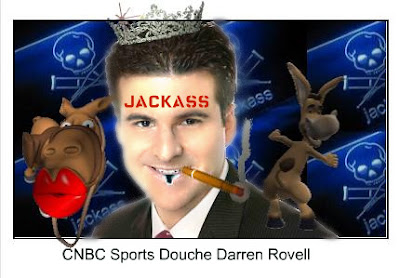 This story is just too damn funny. Want to know why the mainstream media so thoroughly suck balls these days? Maybe part of it is because it hires "reporters" who do things like base their stories on Twitter conversations. Here is Deadspin with the details:


If you are losing a paycheck/business because of the NBA, I want to tell your story. Email me at lockoutstories@gmail.com.

The NBA lockout was still on, and Rovell was looking for a new angle. Tim decided to have a little fun with him. He created a fake email account with the name "Henry James" and the handle hankinthebank1@gmail.com. He sent a note to Rovell's Gmail:


I run an escort service in New york, mostly for away teams players after games but I get some knicks and nets players also. They are the high rollers and im not getting the constant business that I need to stay running.

Rovell was into it, according to their email exchange, which Tim has kindly sent to us. Rovell replied:


Henry,
I can keep you quiet but can you at least give me financial details — how much do players pay typically? what do they get?

Ya I appreciate you keeping me quiet. Some girls are few hundred dollars an hour, some can be a few thousand dollars per hour, they get anything and everything, especially the younger guys. They mostly have their people contact me to arrange it so I rarely deal directly with players.

what percentage of your business is nba then? and how much money would say you're losing? what cut do you then get?

Well its a high profile operation so I get a lot of athletes depending on the season but between entertainers, athletes and just wealthy people 30 percent roughly is NBA related during NBA season. This far into the season ive probably lost 25,000 dollars maybe more, its hard to tell because were working with lower profile clients in replacement for less money. I take anywhere from 65 to 80 % of the cut depending on how long the woman has been working for me.

this is so fascinating to me. so it's either players or people who come into town to see games that the business is coming from. is there virtually no replacement or you are so tapped into the nba players and their managers that it's harder to get other business because you've done it for so long?

There are replacements but they aren't as consistent and not nearly as high paying. Cheapest girl is around 350 or 400 an hour most expensive is 4,000, anywhere from 2 to 6 hours usually

Are you doing a report on this?

He was indeed. The 18-year-old's gag made its way into Rovell's CNBC.com report a few days later:

A 30 percent decline seems to be the magic number, even for Henry, who runs an escort service in New York that he says charges between $400 and $4,000 an hour, depending on the woman.

Henry says he takes between 65 and 80 percent of the total cut to match the players and other high-profile fans, who are with the client an average of four hours.

"There are replacements but they aren't as consistent and not nearly as high paying," Henry said.

Where did Tim come up with these prices? "I came up with that completely off the top of my head," he tells me. "I didn't even Google it." The 30 percent figure, he adds, was "made up and it turned out to be the magic number!"


The real stories of the NBA Lockout including NY escort service whose biz is down 30% bit.ly/sYC8nh

The story took off. Business Insider picked up the escort angle and turned it into a post of its own. So did Yahoo, Slam, Pro Basketball Talk, and many others. (Somehow, we missed this one.)

On Monday, Tim sent us an email, explaining what he'd done. Why had he waited all these months? He says he had forgotten about it, until a friend had texted him out of the blue and told him to send it to us. And what did his friend say?

"He said he's just such a douche on twitter all the time he just got fed up," Tim says in an email, "which I agree with."

Gee, this almost makes me want to join Twitter, given how easy it is to fool the fools whom the bigger fools in the teevee audience actually think know what the fuck they are talking about.


Bonus: "Turn off the teevee...it's killing us, we never speak"