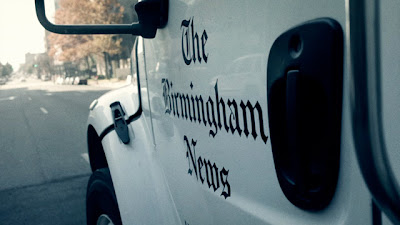 There was an update yesterday to the recent story about the New Orleans Times-Picayune cutting back to three days per week...namely that the axe has now fallen on one-third of the newspaper's staff. Here is the Atlantic Wire with the details:


Despite earlier reports that about half of it journalists would be cut, the dust has settled and the Times-Picayune newspaper has said it has laid off about one-third of its staff--about 201 of its employees.

The Gambit's Kevin Allman (via Jim Romenesko) reports that the severance packages cap out at one year, and fired employees will accrue 1.5 weeks of pay for every year of service. "At least three very familiar newsroom names, including award winners, have said they intend to take severance and/or don't expect to be invited to join NOLA Media Group," writes Allman. Romenesko is also reporting that half of the news staff is being let go.

Not to be outdone, newspapers in Alabama are laying of 400 of their own staff members. Here is the Birmingham Business Journal with that sad story:


Three of Alabama’s largest daily newspapers, including the Birmingham News, will lay off about 400 employees as they cut back their printing schedules and increase their focus on digital.

According to al.com, the laid-off workers will have a chance to apply for 100 or more positions at two new companies, Alabama Media Group and Advance Central Services Alabama.

The 100 vacant positions will be posted at al.com later this week.

It's not clear how many employees will be impacted at the Birmingham News or at each specific paper, but a report from The Poynter Institute cited an unnamed source saying 60 percent of the editorial staff at the News would be affected.

Cindy Martin, who will head the new Alabama Media Group, said she’d been in meetings this morning to let employees know if they will be laid off, but couldn’t confirm which employees or the total number impacted.

The layoffs are part of a series of changes at the newspapers, which will begin publishing only three days a week instead of daily this fall.

I would gather that three-day-a-week newspaper service will soon be the norm for the industry...and that even that won't be enough to save it from eventual oblivion.


Bonus: Before anyone comments about it, I realize this is the wrong Birmingham. Tough shit, I like this song.