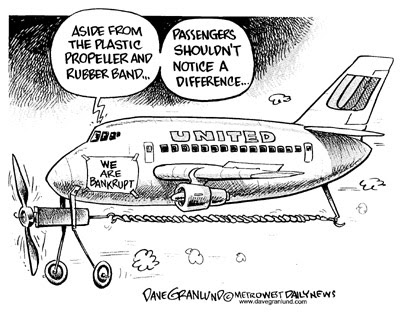 How fitting is is that this story involves GEORGE BUSH airport? Here is the Houston Business Journal with the details:

The Houston Chronicle reports that mere hours after council voted to approve Southwest’s expansion for an international terminal at Hobby, United told employees in a bulletin that it would eliminate 1,300 local jobs and cut planned operations by 10 percent.

The Chicago-based airline’s layoffs are expected to begin in the fall, and it already canceled planned service to Auckland, New Zealand.

United has adamantly opposed Southwest’s planned expansion at Hobby, claiming that it would cost the city jobs at George Bush Intercontinental Airport, it’s local hub, and cause it to stop some international routes.

The Chronicle reports that Houston Mayor Annise Parker said she believes that United is committed to Houston, and that the airline’s decision to immediately cut 1,300 workers is preemptive since the international terminal at Hobby will not be complete for another three years. Therefore, she said, their personnel cuts must be based on other factors than the council vote.

Normally I treat any politician's words as if they are turds that have just fallen into my drink (thanks, Bill!), but in this instance I actually think Houston Mayor Annise Parker is correct. If all were going swimmingly for United (oops, sorry, poor choice of metaphor when discussing an airline) I seriously doubt they would chop employees three years in advance of increased competition coming online.

And that's what makes this last bit even more laughable:


Dallas-based Southwest has argued that having two international airports in Houston will help competition, creating lower airfares that will lead to more passengers. This assumption was supported by a Houston Airport System study that said the new terminal would create more than 10,000 local jobs.

I'll take that bet. in fact, the airline industry is in such dire straights, and their middle class passenger base is so financially strapped, that I would lay even odds as to whether by the time this new terminal is built that the extra capacity is even necessary.


Bonus: I know I've posted this tune before, but I just can't get enough of it