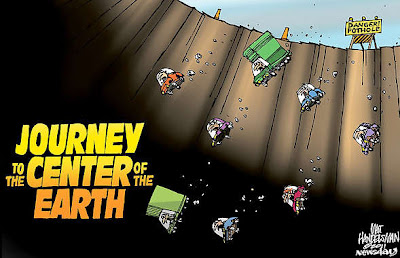 I've covered this topic before, but since the dumbass idea of taxing drivers for the miles they drive instead of just raising gasoline taxes won't go away, here it is again. USA Today has the story:


States are looking for new ways of taxing motorists as they seek to pay for highway and bridge repair and improvements without relying on the per-gallon gasoline tax widely viewed as all but obsolete.

Ummm..why exactly are gasoline taxes supposedly obsolete?
Among the leading ideas: Taxing drivers for how many miles they travel rather than how much gasoline they buy. Minnesota and Oregon already are testing technology to keep track of mileage. Other states, including Washington and Nevada, are preparing similar projects.

The efforts are being prompted by the fact that gasoline taxes no longer provide enough money to pay for roads and bridges — especially when Congress and many state legislatures are reluctant to increase taxes imposed on each gallon. The federal tax of 18.4 cents a gallon hasn't been raised in nearly two decades. More than half the states have not raised their gas tax this millennium. Fuel-efficiency also is behind the efforts. Electric-powered vehicles are growing in numbers. In 2009, President Obama set the nation's most aggressive fuel-efficiency standards for new vehicles, ordering a 40% increase by 2016.

"As the (national vehicle) fleet becomes more fuel efficient … we're going to lose a lot of revenue from the gas tax. If it's not replaced, we're going to see our transportation infrastructure deteriorate," says Joshua Schank, president of the non-partisan Eno Center for Transportation in Washington, D.C. He expects to see a state vehicle miles-traveled (VMT) tax within the next five to 10 years.

I assume from that quote that you only get to be the president of the non-partisan Eno Center for Transportation if you are either an idiot or a paid stooge for wealthy assholes who don't wish to pay their fair share in taxes. Here is what I wrote about this issue last November:


From privacy concerns, to the cost of administering the program, to the logistics of getting a monitoring device on every car, to the unaffordability of a lump sum annual tax payment--the whole concept is so riddled with real world practical flaws that it should have been rejected outright before it ever received coverage in the mainstream media.

Then you have the most obvious drawback of all in that this scheme PENALIZES people who buy fuel-efficient vehicles. After all, what fucking sense does it make from an energy conservation standpoint that a Hummer, which barely gets double-digit miles to the gallon, should be taxed at the same rate as a hybrid that gets 50 MPG, especially when the smaller, lighter hybrid is likely to cause less wear and tear to the roadways that then need to be repaired?

And, of course, I also wrote about the real reason why this horrible idea just won't die:


You don't think it might be because wealthier Americans, including the one-percenters who are the biggest campaign contributors, are the ones most likely to be driving those Hummers and other gas guzzlers, do you? Or that big business would get the contracts to manufacture and install the monitoring devices?

It really is incredible that such a cockamamie scheme is being contemplated just to avoid raising a tax that falls hardest on the wealthy. The sad fact is that the one-percenters are out to fuck the rest of us in so many different ways these days that it is difficult to keep track of them all.


Bonus: From my You Tube channel - another cool driving tune from Chicago indie rock troubadors, The Vulgar Boatmen