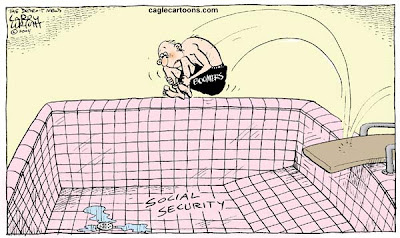 This is a good companion piece to yesterday's post about raising the retirement age and why it won't work. From the New York Times, nobody could have predicted:


This retirement oasis in the desert has long beckoned those who want to spin out their golden years playing golf and sitting by the pool in the arid sunshine.

But for Clare Keany, who turned 62 last fall and cannot find work, it feels more like a prison. Just a few miles from the gated estates of corporate chieftains and Hollywood stars, Ms. Keany lives in a tiny mobile home, barely getting by on little more than $1,082 a month from Social Security.

“I would rather be functioning and having a job somewhere,” said Ms. Keany, whose pixie haircut, trim build and crinkling smile suggest someone much younger than her years. “I really don’t enjoy living like this. I’ve got too much to do still.”

Even as most Americans are delaying retirement to bolster their savings accounts, the recession and its protracted aftermath have forced many older people who are out of work to draw Social Security much earlier than they had planned.

According to an analysis by Steve Goss, chief actuary for the Social Security Administration, about 200,000 more people filed initial claims in 2009 and 2010 than the agency had predicted before the recession and he said the trend most likely continued in 2011 and 2012, though that is harder to quantify. The most likely reason is joblessness.

Ms. Keany had always expected to work into her 70s and add to her retirement cushion. But after losing her job as an executive assistant at an advertising agency in 2008, she searched fruitlessly for full-time work and exhausted her unemployment benefits. For a while, she strung together odd jobs and lived off her 401(k) retirement and profit-sharing accounts. Then, this year, with her savings depleted and no job offers in sight, she reluctantly applied for Social Security.

Gazing out the window where the Santa Rosa mountains rise behind the mobile home park, she said, “It just seems a waste of a life, to be honest.”

It makes you wonder just how many millions of other people there are out there who are a couple of missed government checks away from homelessness and starvation. Yet, as the story goes one to demonstrate, so many people still have completely screwed up priorities:


Finally, in January, she gave in and filed for Social Security. Her monthly check covers the $336 mobile home park fee plus utilities, her cellphone bill, insurance and a satellite dish. She is also paying $100 a month in credit card debt. To save money, she has canceled the data plan on her BlackBerry and cut back on fresh fruits and vegetables.

Notice that despite having been essentially unemployed for four years, Keany still insists upon paying satellite teevee and cell phone bills and only recently cancelled her Blackberry data plan. In fact, having the damn television and cell phone is apparently more important to her than even eating properly.

The article also mentions that she is not married, does not have children and was earning $64,000 per year before she got laid off. Not to be too much of a dick about it or anything, but there really was no excuse for her to be running up her credit card balances and not having saved a lot of money for a rainy day while she was still working.

Keany's example is why I am always torn when I read these kinds of articles between feeling empathy for those who are hurting yet shaking my head at their obvious stupidity. Most importantly, in these examples we see people who will not survive long when the day finally comes that the government checks stop coming.