Why Formal Education Often Doesn't Help the Underclass, and Why It Won't Matter in the Future 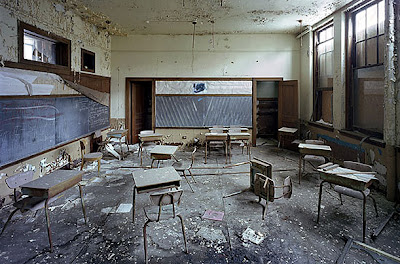 Readers of this blog will remember Leslie, the young recent college graduate carrying $100,000 in student loans who stayed with my wife and I for a few days during her job search. Despite her situation, Leslie reminds me a lot of myself at her age: eager and energetic, full of ideas about how she can help change the world. While we were discussing her future the subject of social inequality came up—as it often does with progressive minded, well educated young people—and she repeated the standard mantra that I’ve heard many times before that education is vital if poor people are ever going to be able to pull themselves up by their bootstraps. Access to better quality schooling, the argument goes, is the key to combating unemployment, teen pregnancy, crime and the cycle of poverty in general.

Before I go on, I should emphasize that I have not in middle age become some wild eyed follower of Ayn Rand who blames the federal government for illegally seizing my hard earned tax dollars only to redistribute it to “parasites” who contribute nothing to society. I am fully cognizant that the real parasites are the corporations, big banks and Wall Street who—if you count the trillion dollars plus in annual American war spending, the primary purpose of which is to make the world a safe place to make a buck—are the biggest welfare queens of all.

Nevertheless, unlike most people in the middle to upper middle classes, I grew up around kids who didn't have much and in my career have actually worked fairly closely with members of the underclass. For several years after I graduated college my job was to conduct housing benefit investigations involving people who were committing fraud in order to receive rental assistance. Not the most glamorous occupation in the world, obviously, and one that I moved on from as soon as I was able. But it was an invaluable experience, and one that first made me question the conventional liberal values I had carried as a college student.

For this is what I found in my experiences with the working (and some not working) poor: formal education appears to do little to help a lot of them. Many modern liberals make the mistake of thinking that most poor people are just like them but have merely not been given the opportunity to succeed. Now, I won’t argue that on occasion some gifted individual doesn’t break the bonds of the housing project and have great accomplishments in life. There are plenty of examples where that has happened. But they are the exceptions who are hardly reflective of the norm. Indeed, Leslie herself achieved a Masters’ Degree despite a rough upbringing, which included both of her parents dying when she was a child.

This is also not to argue that there are not plenty of complete idiots running around who are middle class or above. The difference for the latter, of course, is that the higher up the food chain you go, the stronger safety net. If you are George W. Bush, for example, you can spend half of your life as the alcoholic family fuck up and still get to be President.

As I gently explained to Leslie, the problem with formal education as a supposed cure-all for our societal ills is that many people simply lack the intellectual capacity for it to be of any real benefit. Statistically, half of the population has IQs below 100, and I think it is difficult for those of us blessed by having been born on the high side of the number to contemplate just how bewildering our complex modern society must be to someone who is on the lower end of the scale.

We also tend to forget that the idea that everyone, down to the lowliest member of society, should be a fully functioning citizen who participates in all aspects of our representative democracy is an historical anomaly enabled by the economic abundance brought on during the all-too-brief cheap oil era. For most of human history, members of the underclass were the serfs, disposable labor to be exploited by kings and nobility who rarely lived beyond their 40th year. No education was necessary for those folks, just get the men working in the fields and the women producing as many babies as possible to overcome the high rate of infant mortality and maintain a steady supply of labor. When you think about it that way, the whole teen pregnancy issue, for example, can be seen in a whole different light. No matter how well intentioned, those working to prevent it are actually fighting thousands of years of human evolution.

There was a kid who lived down the block from me when I was growing up who dropped out of school at age 16 having mentally checked out several years before that. Predictably, that same kid could never hold a steady job and ended up in prison by age 19 despite the fact that his father was a cop. When it comes to education you can lead a horse to water but you can’t make him drink, especially if the horse lacks a basic understanding as to what purpose the water serves.

The tasks that many of us take for granted—balancing a checkbook, reading and understanding the terms of a mortgage document, differentiating between two political candidates’ positions and heck, even completing a job application—must be pretty daunting to someone whose mind has difficulty grasping basic mathematical concepts or the meaning of complex words and phrases. The rise of the personal computer and the Internet these past 20 years has just made matters worse.

As I said to Leslie, I am very much a believer in a level playing field; that every child should, as much as society is able, be provided with a fair chance to succeed. That means access to the same quality of education whether you live in a tony suburb or an inner city housing project (it is in this area that America’s education system most dramatically fails many of its children). But no one should expect that even an impossible-to-achieve complete equality in formal educational opportunities would eliminate or even put much of a dent in the number of Americans who represent the permanent underclass.

The irony in all of this is that as peak oil and resource depletion accelerate the devolution of our modern industrial society, some of these folks will likely be much better prepared psychologically to handle it than most in the middle and upper middle classes. After all, when you’ve never had anything, nor have you ever expected to have anything, you won’t be wasting your mental energy lamenting what you’ve lost. Instead, you’ll be getting on with surviving as best you can, just like you always have.
Posted by Bill Hicks at 6:39 AM