Trip Report: Bermuda is Doomed, Part 1 (or What I Did on My Summer Vacation) 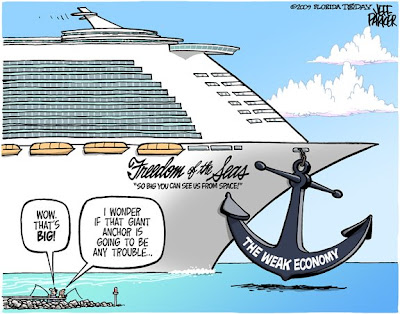 I try not to make this blog too much about me. There are many more pressing issues out there to write about and my life really isn’t all that interesting anyway. So I promise I’ll limit the ruminations as to what’s going on in my world to just those instances when I think it’s relevant to the overall theme of The Downward Spiral. With that qualification, please indulge me as I recount what I did on my summer vacation.

If there is a more decadent way for a middle class person to spend a week of his or her time in the twilight of the cheap oil era than taking an ocean cruise, I don’t know what it is. These modern massive cruise ships accommodate over 2000 passengers, have many hundreds more crew members, and gobble up more nonrenewable resources than I care to imagine. Nevertheless, it was a nice thing to do with the missus, and I was looking forward to seeing Bermuda the same way I always look forward to traveling to some corner of the world where I’ve never been before. Travel expands the mind even more than drugs do, and I’m WAY too old at this point in my life to be taking illegal pharmaceuticals.

But first you gotta get there, and while the ship we were on had every imaginable luxury and was about as well run as such an operation can be, the downside was being cooped up on board for a couple of days with a large horde of entitled, clueless middle class Americans. This crowd skewed older; probably well more than half of the passengers were couples in their 50s and 60s—in other words a perfect sampling of the Baby Boomer generation that won the golden lottery ticket of growing up during America’s postwar, cheap oil fueled economic bonanza.

Had you been dropped out of the blue onto one of the decks of that ship without having any idea where you were, the first thing that would have struck you is just how obviously soft and spoiled most of these people were. More than half of them were overweight, ranging from a bit pudgy to grotesquely obese—quite a repugnant sight when everyone is running around in their bathing suits, let me tell you. Making matters worse was the tattoo ink scrawled across much of that flab. I’ve never figured out why people with bad bodies are so keen to draw attention to their least attractive features, but then again there are a lot of things I don’t understand about my fellow Americans these days.

Nevertheless, we were determined to enjoy ourselves and not be distracted from being in the midst of a floating State Fair. Sometimes though, we couldn’t help but be dismayed, like when the otherwise seemingly sensible retired bus driver at our dinner table started going on and on about how Obama was born in Kenya and thus wasn’t eligible to be President. I wanted to reply that there are so many LEGITIMATE reasons to criticize Obama and that the Birther issue merely serves as a media-manufactured distraction that helps to drown out and discredit that criticism, but I could see it wasn’t going to do any good. So instead, my tablemates and I quickly steered the conversation into safer rhetorical waters.

After about the third day on the ship my wife intimated to me that she found talking to the crew members far more interesting than conversing with any of our fellow passengers, and I found it hard to argue her point. Most of the staff were Eastern European—not an overweight one among them, incidentally—and they literally worked their rear ends off. They told us they sign six-month contracts with the company before they go on board—which means six months of straight work, every single day, without a day off. Our cruise lasted exactly one week, which meant we came aboard the ship in the afternoon after the previous group of passengers had departed just that morning. Our waiter at dinner, a charming young man from the Ukraine, said his typical day was 15 hours long, except for that one day a week the passenger list changed, which might instead be only half of that.

Most of the crew had families back in their home countries that were, of course, benefiting from their labors. Invariably, when we asked them if they missed their loved ones they said of course they did, but then they’d smile as they’ve no doubt been programmed to do by the company and say they were looking forward to spending a lot of time with them when they returned home after their contracts were up.

Much as we tried to put it out of our minds and just relax as we were supposed to do, we couldn’t help but feeling sympathy for the crew. Here was a group of people, born poor by geographic happenstance, laboring profusely to ensure the comfort of another group of people, born into abundance again by geographic happenstance. Luck of the draw was the only difference between the fat slob sucking down his third Margarita by the pool and the svelte, dapper waiter who was bringing it to him for an hourly wage that would likely add up to be far below the U.S. federal minimum.

Anyway, we endured, got to Bermuda and had a great time (I’ll have more about that in Part 2). But before I wrap this up, one final anecdote:

On our last day on the ship, we were chilling out topside in a couple of deck chairs enjoying the sunshine and the fresh seas breezes when one of our fellow passengers plopped down in the chair right next to us. She was about 55 and had to have been somewhere in the vicinity of 80-100 pounds overweight—in other words exactly the kind of person who shouldn’t be seen out in public wearing a bathing suit. She settled in, opened up a book, and started read. The book was, and I swear I’m not making this up, The Fountainhead by Ayn Rand. A curious choice of beach reading material, to say the least. After a while the lady dozed off in her chair, no doubt put to sleep by the warm sunshine and turgid prose, and probably dreaming sweet dreams of that glorious future day when the federal government stops supporting the “parasites” with her hard earned tax dollars.

Oh waiter; on second thought, make mine a double.
Posted by Bill Hicks at 7:31 AM