Friday Rant: If You Want to Understand What’s Really Going on in the World, Stop Thinking Like a Middle Class American 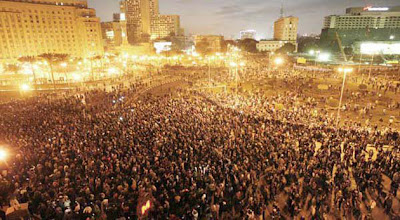 I was having a conversation with a professional colleague the other day who had spent some time working in Egypt and was reassigned back home shortly before the protests erupted that resulted in the abrupt departure from power of Hosni Mubarak. We started talking about the state of the economy, and I mentioned how the reckless policies of the Federal Reserve, engaging in Quantitative Easing and setting interests rates near 0%, were a primary factor leading to Mubarak’s ouster and the civil unrest that has been spreading across the Middle East. My colleague, who spent a year in Cairo and presumably would have seen the conditions there first hand, looked at me quizzically and asked on what basis I was making my assertion.

I patiently explained that by flooding the world’s economy with liquidity, Benny and the Ink Jets (as I affectionately refer to Federal Reserve Chairman Bernanke) devalued the dollar and greatly increased speculative investment in the commodities markets by the same pack of jackals that crashed the economy in the first place. This has led to a dramatic rise in the costs of food and energy, which are priced in dollars due to America being in the advantageous position of having the world’s reserve currency. I specifically mentioned the exploding price of sugar, which had been cited in several news reports as having been a major factor in the initial uprisings in Tunisia that eventually spread to Egypt.

This only produced more obvious confusion on the part of my colleague. Sugar, he asked, how is that such a big deal?

Now then, I can be much more patient when talking to people in meat space who remain in the dark about the issues that I write about on this blog than it sometimes may seem from how I come across around here. Instead of being snide or condescending (after all, I gotta work with this guy), I explained that historically, rising food prices have ALWAYS been a key factor in revolts against oppressive regimes. I went on to add that in order to really gain an understanding of what was happening in Egypt and elsewhere, my friend needed to stop thinking like a typical middle class American.

Not since the Great Depression have the majority of Americans had to think much about the costs of food and energy, which for most people during the post-World War Two period have consumed only a relatively small percentage (maybe 10-20%) of the family budget. As I stated to my colleague, however, just the cost of food alone for the vast majority of Egyptians takes upwards of 50% or more of their annual income. Therefore, an increase of, say 25%, in the cost of basic foodstuffs like corn, wheat and sugar, a mere annoyance to most Americans, can literally be a matter of life and death to people living at or near subsistence level who do not have a food stamp program to fall back on to feed their children when times get rough.

At about this point, I sensed some understanding beginning to dawn upon my colleague. You know, he said, I never thought of it that way.

I added that there are a lot of issues he would understand better if he dropped his American-centric view of the world. It doesn’t take too much imagination, I said, to realize why people in countries where our military is dropping drone missiles might hate us. Certainly, we would probably hate them if they were doing the same to us.

You’re right, he answered, but I could tell he was getting uncomfortable with the direction of the conversation so I let it go at that.

Such points ought to be blindingly obvious, but they rarely are to a citizenry who are constantly being fed the lies regarding American Exceptionalism by our corporate-owned and utterly compromised mainstream media. The resulting lack of critical thinking allows our government officials, as they did the other day for example, to announce that they are exploring the possibility of war crimes charges against Syria while being confident that their fellow Americans will never demand they be held accountable for the many civilian deaths that result whenever our drone missiles fly.

The whole conversation left me profoundly depressed. For if my colleague, a well educated American of the tiny minority that has not only traveled overseas but lived there as well, could be so utterly clueless about the real state affairs in the world what hope is there for the bovine herd sitting around munching buffalo wings, drinking Lite beer and watching Jersey Shore? The default position for most people today is not only to not know, but to not want to know. As long as the lights go on when they hit the switch, the supermarket has plenty of food on the shelves and the filling station has gasoline available for the SUV, all is well and good.

Pass me the remote, hon, this show is starting to bore me.
Posted by Bill Hicks at 6:49 AM