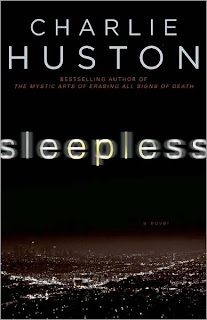 How the World Ends: An epidemic of insomnia is slowly consuming humanity.

Scenario: A dedicated undercover cop and an ice cold, aging hitman barrel towards confrontation in a slowly imploding Los Angeles during the year 2010.

Coolness Factor: Sleepless, as the mysterious disease is called, is actually a metaphorical stand-in for the onrushing effects of Peak Oil and resource depletion. Sleepless, the novel, is an action packed thrill ride with plenty to say about the likely near term future of humanity.

Likelihood of Scenario Coming True: 10 out of 10. It’s not that an epidemic of insomnia in imminent or even a realistic possibility—it is rather that author Charlie Huston’s vision of the near term future as society breaks down is realistically scary and plausible.
Posted by Bill Hicks at 6:51 AM