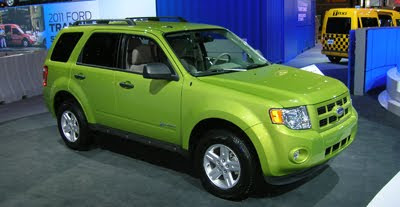 I bought a new car this past weekend. Yeah, yeah, I know, shame on me for engaging in such “business as usual” behavior—but the oil age isn’t over yet and I still have to get around. After a bit of research, I settled on the Ford Escape, a smaller SUV that can haul a lot of stuff without sucking down a main battle tank’s worth of fuel. I was able to get a good deal, and I’m quite happy with it—which is especially important because I keep my cars for a long time and this could well be the last one I ever purchase before the day finally arrives when gasoline becomes prohibitively expensive.

Anyway, when I first started looking, I decided to check out the hybrid version of the Escape, not because I have any silly illusions about hybrids saving the Earth by being “green” or anything, but because I was hoping to maybe save a little gas money. Bad timing on my part as it turned out, for not only was the hybrid model a staggering $7,000 costlier, there were none available at my local dealership unless I wanted to buy the ugly lime green (for the “greenies,” I guess) showroom model. Of course, the salesman was happy to take me to the back lot where over a hundred regular Escapes were all lined up in rows, with just about every feature and color combination I could have possibly desired.

Business must be a little slow, I remarked. He laughed off the comment, but the truth was pretty obvious. He said I could have my pick of the lot that very afternoon, but if I wanted the hybrid version in anything other than a color that made me want to puke I’d have to wait at least six to eight weeks. I told him I would consider my options and went home to talk it over with the wife.

In the end, the decision was easy. We went with the regular version since it is not a commuter car and we will mostly use it for highway driving— the hybrid’s gas mileage on the open road was not nearly enough of an improvement to justify the huge additional cost. Even if gas prices soar to over $5 a gallon sooner rather than later it would still take years to make up the difference.

All of this got me thinking, as just about everything that happens in my life does these days. Clearly, the recent run-up in gasoline prices is once again having a major effect on the public’s car buying habits. It’s depressing to realize how quickly people forgot about the last gas price spike even though it was less than three years ago. For awhile hybrids and other gas sippers were all the rage, but not more than a year after oil prices subsequently crashed along with the stock market, I started seeing a large number of brand new behemoth SUVs and pick-up trucks on the roadways again.

A while back, I wrote a post about the 1980 presidential candidacy of Republican Representative John Anderson, who advocated as one of his central campaign planks a 50 cent a gallon federal gasoline tax (equivalent to about $1.50 today) as a response to the energy crisis of the late 1970s. Anderson instinctively realized that the only way you were going to get Americans to change their behavior, conserve energy and look for alternatives was to hit them in their pocketbooks. It should have been done then, and it most definitely should be done now…but instead you have the spectacle of President Obama and other world “leaders” releasing oil from various nations’ strategic petroleum reserves in a desperate effort to keep prices down.

So what will happen if they manage to succeed in their efforts for a year or two? People will drive more than they otherwise would have, will purchase bigger vehicles than they otherwise could have afforded to buy gas for, and in the near future, probably right after the next presidential election, we will be right back where we started, only with several hundred million less barrels of oil in those reserves that are supposed be there for dire emergencies.

Today it is likely way too late, even if it were politically possible, for America to change course before the onset of a peak oil-induced economic catastrophe. Indeed, we are already well into the early stages of it. The time to act was back when John Anderson was running his quixotic campaign for the presidency. Despite complete inaction on the part of the federal government back then, America did experience a significant decrease in gasoline consumption during the first half of the 1980s as people bought smaller cars and automakers were motivated to build more fuel efficient vehicles. During his college days in the late 1980s, for example, my brother owned a tiny little Geo Metro that got over 45 miles a gallon—more than many hybrid models do today.

Sure enough, however, once gas became cheap again as the last supergiant oil fields in the North Sea, Alaska and Mexico came online we reversed course and carmakers began trotting out the gas hogs, first the minivan and then the SUV. Today, by my casual observation vehicles larger than the ones Americans drove back in the 1970s constitute about half of the passenger vehicle fleet.

One last thing of note about the car I bought. I hadn’t purchased a new vehicle since the bad old days of 2002, which was just as the I-Craze was getting started; so I was astonished that my new car came with an IPod connection, a USB port and more electronic doohickeys than I will likely ever be able to figure out how to use. Add in hundreds of satellite radio channel options, and I seriously wonder how some people find the time to actually keep their eyes on the road. Anyone remember back when cars just had an AM radio dial? Then again, that’s very much the motto for America these days: Entertained at All Times and at All Costs.
Posted by Bill Hicks at 6:46 AM