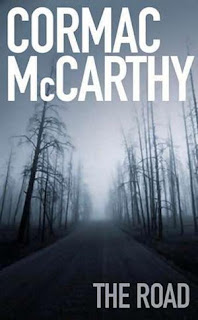 How the World Ends: Not specified, but probably nuclear war.

Scenario: A father and his young son follow the road trying to find a place where the landscape is not utterly barren and forlorn.

Coolness Factor: The most “respectable” doomer novel out there, likely because of McCarthy’s stature as an author and a prominent endorsement from Oprah Winfrey. This is the one doomer book most people have read if they have read any at all. Viggo Mortensen was PERFECT playing the father in the movie version.

Likelihood of Scenario Coming True: 5 out of 10. Just because the Cold War is over does not mean the threat of a nuclear conflagration has ended. In fact, it seems likely that the risk will greatly increase as the coming resource wars begin to flare up in earnest.
Posted by Bill Hicks at 6:06 AM