He Who Feeds You, Owns You – Food Stamp Enrollment Surges Above 44 Million 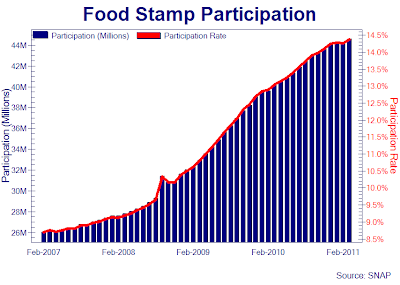 It was reported yesterday that enrollment in the Supplemental Nutrition Assistance Program (SNAP), still better known by its colloquial name, Food Stamps, rose to a new record high of just over 44 million Americans. As shown by the chart above (courtesy of Zero Hedge), the number of SNAP recipients has been marching steadily upwards since even before the beginning of the Great Recession, starting at around 26 million in February 2007 and surging by 18 million since then. For those of you keeping score at home, that means that our most basic social welfare program has been expanding at a rate of about 350,000 individuals a month for over four years now with no end in sight.

I’ve long argued that the untrustworthy and manipulated official unemployment statistics are no more reliable an indicator of what’s going on in the real economy than is the completely rigged Dow Jones Industrial Average. If you want a true picture of what is really happening on Main Street you need look no further than the SNAP figures, which show a tsunami-like surge of people living in abject poverty. The chart also shows that the percentage of Americans receiving food assistance has risen from just 8.7% at the beginning of 2007 to about 14.3% today. Sadly, according to Wikipedia, nearly half of all SNAP recipients are children.

Becoming a food stamp recipient means you have slid all the way down to the lowest rung of the socioeconomic ladder, since in order to qualify you have to have no better than a poverty-level income. More importantly, being reliant upon the SNAP program means that your very survival is dependent upon the ability of the United States Government to service its debt and come up with the $133.12 it sends out to each recipient every month. The overall cost of the program is skyrocketing because of the huge surge in enrollment, and is just one of many factors putting upwards pressure on the federal deficit at a time when the nation's credit card is coming within sight of being maxed out.

It's also an indicator showing why the “debate” going on in Washington right now over lifting the federal debt limit is just so much sound and fury signifying nothing. For while it’s true that our nation’s “leaders" long ago stopped caring about the poor, that is only so long as they can manage to keep them invisible and their plight away from the national spotlight. Let the SNAP payments lapse for a few months and I’ll bet even our lapdog mainstream media might begin to notice when a large number of kids start showing up to school in poor areas looking like Ethiopian famine victims. For this reason alone the debt limit will eventually be raised, unless things really have gone completely off the rails in the nation’s capital.

So here we are, faced with yet another intractable problem that has been made exponentially worse by a feckless national political leadership that has allowed the wealth of the nation to be stripped down and stolen by the greedy elites who finance their campaigns. It was bad enough when huge numbers of blue collar and middle class jobs were being shipped overseas in the name of the corporate bottom line. But now, by driving America to the brink of insolvency they have virtually assured that the day will come in the not too distant future when the SNAP cards will fail to recharge at the beginning of the month. And that will unleash a humanitarian tragedy the likes of which this nation of historical food abundance has never seen before.
Posted by Bill Hicks at 6:06 AM