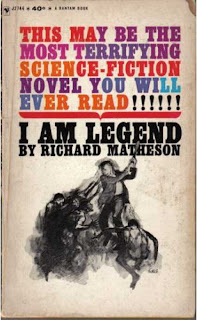 How the World Ends: An epidemic of rampaging vampirism.

Scenario: The last man alive is under siege in Los Angeles and is barricaded in his house every night, venturing out only during the day to forage and kill vampires in their sleep.

Coolness Factor: Hollywood absolutely loves this story, having essentially made it into three major motion pictures starring Vincent Price, Charleston Heston and most recently and regrettably, Will Smith. The book is far superior to all three, especially the ending, which twists the reader’s perception of who really is the monster.

Likelihood of Scenario Coming True: 0 out of 10. To the disappointment of millions of Twilight fans everywhere, there is no such thing as vampires.
Posted by Bill Hicks at 6:35 AM