Lies Our Leaders Tell Us – “Nobody Could Have Predicted” 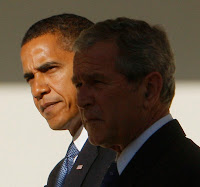 There has been a lot of commentary within the peak oil movement as of late noting that the concept seems to be creeping ever closer to mainstream acceptance. While we should be heartened that the logic of our arguments is finally beginning to shine through the fog of denial and obfuscation, we also need to remind ourselves that we still have a long way to go before any major political leader will be willing to come out and flatly acknowledge the truth. So how will we know when that happens? I suspect it will be when we hear this phrase uttered in connection with peak oil: “Nobody could have predicted…”

If I’m right, it will be the third time that phrase has been applied to an issue of grave national concern in recent memory. The first time was right after 9/11, when apologists for the Bush administration used it to deflect criticism that both the president and his senior officials had completely dropped the ball on protecting the country from a major terrorist attack. They had, of course, and it was ultimately revealed by former Chief Counter-terrorism Advisor Richard Clarke that warnings of the impending attack were repeatedly sounded by lower level officials in the months leading up to that awful day.

But what about the argument itself—is it true that nobody could have predicted that a terrorist might fly a jet airliner into a vital building? Not hardly. Back in 1974, when Osama Bin Laden was still a student in Jeddah studying economics and business administration at the Al-Thager Model School, a disaffected, unemployed American tire salesman named Samuel Byck attempted to hijack an airliner at Baltimore-Washington International Airport so he could fly it into the White House and kill President Nixon.

That Byck’s plan had little hope of success was due to his lack of planning and impulsive, cowboy-like attempt to storm on board the plane. There is little doubt, however, that had Byck employed a more rational approach—taking flying lessons as later did the Al-Qaeda operatives and boarding the plane disguised as a normal passenger—he would have had a fair chance of success. If such a delusional, angry loner could think of the idea 27 years before OBL’s minions successfully pulled it off, you know there were plenty of contingency plans aimed at preventing it buried within the federal government’s national security vaults. Nobody could have predicted…indeed.

The next time this big lie came in to play was in the wake of the economic crash of 2008 that was primarily caused by the popping of the housing bubble. Once again, our nation’s so-called “leaders” trotted out the phrase over and over even as they rammed a $700 billion bailout package for Wall Street and the big banks down the American taxpayer’s throats. How could anyone have possibly known that average home prices doubling in less than a decade and being used issue debt to prop up the entire economy was unsustainable? This was the line repeated over and over again by everyone from President Bush to Treasury Secretary Henry Paulson to former Federal Reserve Chairman Alan Greenspan; the latter of whom, of course, did more than any other single figure to set the financial conditions that created the bubble through his reckless interest rate policies.

So how could any of the politicians and the players who profited so handsomely off the housing bubble and who stood to lose it all without the bailout possibly have known what was going to happen? Well, perhaps by listening to respected voices like New York University Economics Professor Nouriel Roubini, who argued long before the bubble popped that it had the potential to cause an economic crash "much nastier, deeper and more protracted" than the 2001 recession. As is always the case when a truth-teller gets in the way of the making of massive corporate profits, Roubini was ignored and the party continued on until the collapse of Lehman Brothers triggered a panic that nearly brought down the entire U.S. banking system. Nobody could have predicted? Not from where I’m sitting.

Of course, the most maddening aspect of when the phrase inevitably gets used in connection with peak oil is that the warning signs have been there for nearly 40 years, dating all the way back to the first gas lines in 1973. As I noted in an earlier article, Rand Corporation Analyst Richard Nehring produced a paper for the CIA in 1978 that made an uncannily accurate prediction about how long world oil supplies would last. Nehring gave a figure of 60-90 years until the oil ran out, and a third of a century has passed with his warning having gone essentially unheeded by policymakers. Making matters worse, we have also learned since Nehring’s time that from an economic standpoint it is not the total amount of remaining oil reserves that really matters, but rather the RATE at which those reserves can be extracted.

So that brings us back to the present day in which those of us in the peak oil community await the uttering of that phrase, “Nobody could have predicted…” in connection with oil production and energy supplies. Thinking about all of this, you realize just how feckless America’s political leadership really is. There is no more fundamentally basic responsibility of any government than to ensure that a nation is secure from attack, that its economy is not vulnerable to collapse and that it has sufficient energy supplies to meet its future needs. Within just this past decade, our so-called “leaders” have utterly failed us on all three counts.

But nobody could have predicted…
Posted by Bill Hicks at 7:13 AM