Trip Report: Bermuda is Doomed, Part 2 (or What I Did on My Summer Vacation) 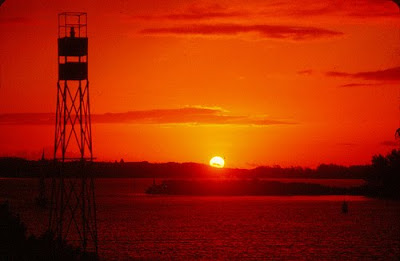 If you haven’t been fortunate enough to ever go there yourself, Bermuda is an absolutely beautiful little corner of the globe—beautiful, that is, for a place that is completely and utterly doomed. The people are quite friendly (or at least the ones involved in supporting the tourist trade are), the climate is delightful all year round and even though I’m not the world’s biggest beach aficionado, I will say that I have never encountered a finer or more spectacular stretch of sand than the ones on which we found ourselves sunbathing.

I was actually quite intrigued by the history of the place, which is one reason I wanted to go there. The first permanent inhabitants didn’t arrive until 1609, when a British ship that was part of a relief convoy headed to resupply the starving Jamestown colony got blown off course in a storm and was shipwrecked. The enterprising crew built a new vessel and continued on their way (leaving a few hearty souls behind), and when the captain returned to England he convinced the crown that the island chain would make a great naval weigh station.

So Bermuda is actually one of those very rare places settled by Europeans utterly without the taint of colonialism or native genocide. Unfortunately, the British being the British—in other words never ones to allow humanitarian principles stand in the way of making a quick buck—they had to go and mess it all up by introducing slavery to the colony only a few years after its founding.

One thing I learned during a visit to the local history museum I found fascinating is that for many years Bermuda was a leading supplier of vegetables to locales from New York all the way up to Nova Scotia. In the 19th and early 20th centuries, the colony exported tens of thousands of pounds of vegetables every week, which was especially appreciated by their northerly neighbors during the long, cold winter months. Even now, as we rode around the island we could see the legacy of those days—large vegetable plots squeezed into the crowded interior landscape seemingly almost randomly. Vegetables are such a big part of Bermuda’s history that the colloquial nickname for a local person is, I kid you not, an Onion. Thus the name for a charming pub we visited that was founded by two proprietors, one French, the other Bermudan: The Frog and Onion.

Bermuda’s agricultural past simply highlights the very large problem it faces in this era of peak oil and resource depletion. The archipelago, charming as it is, has a current population of over 65,000 squeezed onto just 21 square miles of land. From once having been a huge exporter of vegetables, Bermuda now imports about 80% of its food. Making matters worse, tourism currently constitutes an estimated 28% of the islands’ GDP while international business contributes about 60% of its economic output (according to Wikipedia).

You can see where I’m going with this. Bermuda is a vastly overcrowded place, totally dependent on food imports with an economy that is utterly dependent on cheap energy. When tourists like me stop going there to spend their excess dollars, and the international firms that rely upon cheap oil-fueled globalization to conduct their business collapse, Bermuda is in deep trouble. And that doesn’t even take into account rising sea levels from climate change and the accelerating worldwide depletion of fish stocks.

Already, cracks are appearing in the façade of Bermuda’s prosperity. They obviously don’t like to advertise the fact but crime, once nearly not existent, has been on the rise in recent years. In several shop windows around the capital city of Hamilton we noted posters supporting something called Bermudians for Non-Violence—which made me wonder exactly who the Bermudians in favor of violence were.

Bermuda also experienced a housing boom similar to America’s, with the average price of a house soaring to an incredible $1.6 million in 2006. Prices are said to have dropped significantly since then, but there are no reliable current figures. How far are those prices likely to drop when the there is no longer any cheap aviation fuel available to power the airliners that bring the tourists, nor any cheap diesel fuel to power the cruise and cargo ships?

All in all, it was lovely trip, and one I am very glad to have had the opportunity to make while it is still possible. But as with so many other things after one becomes aware of Peak Oil, it was difficult to completely put aside thoughts of doom even as I enjoyed this one particular moment in the twilight of the cheap energy era.
Posted by Bill Hicks at 7:45 AM