How Long You Have Left Depends on How Prepared You Are 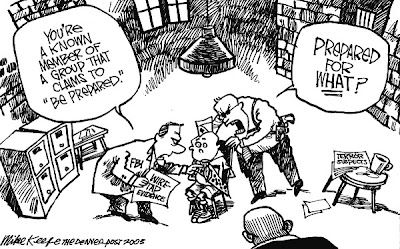 With this post I am probably going to raise the ire of some of my friends in the doomer community who adhere to belief in the so-called “fast crash” Peak Oil scenario, as this analysis is going to assume that the ongoing ‘slow crash” we have been experiencing since 2008 (and arguably much longer than that) is going to continue. Of course, part of the slow crash/fast crash argument depends on how you define “fast” and “slow.” I define a “slow” crash as taking at least a generation to play out, but some would say that America going from a globe-dominating colossus to a powered down feudal state in around 20 years is from a historical perspective the very definition of a fast crash. Point taken, I cannot argue with that.

Most fast crashers, however, believe that we are right now approaching the point at which the global financial system will collapse, resulting in massive disruptions to food and energy supplies and quickly causing law and order to break down as looting and rioting spread across the landscape. So far the closest we have come to that scenario playing out was after the Lehman Brothers collapse in September 2008 when the U.S. banking system suffered an electronic run and, if the subsequent news reports are to be believed, only a massive cash infusion by the Federal Reserve prevented a complete failure.

Since those harrowing days, however, things have stabilized, even if only through an insane level of borrowed money being injected into the entire economy by the U.S. Treasury and the Federal Reserve. You can argue that these easy money policies are devaluing the dollar and are creating utterly unsustainable levels of debt, and you’ll get no objection from me on that point. But you cannot deny that they HAVE worked in the short term. Moreover, they have greatly reduced the likelihood of a fast crash anytime soon since The Powers That Be now recognize the risks and will act to head off any other event that could trigger another banking panic, as they have recently in Greece. If that isn't enough to convince you, ask yourself this: how many of us doomers watching events unfold in the fall of 2008 would have predicted that three years later the facade of business as usual would still be firmly in place?

However you define what’s coming, and I prefer how peak oil activist Chris Martenson puts it as part of his excellent Crash Course series of videos—“The next 20 years will be utterly unlike that last 20 years”—we have clearly reached a turning point in American and human history and huge changes will shortly befall all of us. An often asked question for those that have accepted this basic truth then becomes, “How long do we have?” Well, I don’t claim to be a savant or a fortune teller. All I am is a blogger sitting on the couch in my basement who tries to exercise a little critical thinking about the state of the world using as much impartial data as I can find. So with that in mind, here is my ambiguous answer in the best tradition of the American legal system: It depends.

Wow, Bill, I hear you saying. Awesome analysis. I could just as easily have come up with that one on my own.

Okay then, bear with me for a moment while I define what doom really means. Are we in agreement that doom for the average person means unemployment, homelessness, hunger, being in constant discomfort and having absolutely no hope for the future? That sure sounds like my definition of doom--the point where I as someone who relishes every day of my life upon the surface of this planet would seriously consider locking and loading my very last round and sending it through the roof of my mouth into my brainpan.

By that definition of doom, there are many people in America who are either already there or are drawing perilously close. In the past few years, I’ve passed by numerous homeless camps on the sides of the road around my area and have seen the broken down derelicts who occupy them. It used to be that you only saw such folks in the inner city, but nowadays there are plenty of places in the suburbs and exurbs where they congregate. Traditionally, most homeless people were in that condition due to prolonged substance abuse or mental illness, but you have to figure that the explosion of their numbers in recent years is largely due to job losses and not knowing how to cope with the new economic realities.

It’s the people in that latter category who serve as an example of the future that will soon be faced by tens of millions of Americans. Most people today still believe there is nothing fundamentally wrong with our economy, that the downturn of the past few years is just a hiccup and eventually everything will return to normal. You can see this in the numbers of the unemployed who are foolishly taking out student loans to go back to school in order to make themselves more marketable, despite the fact that there are few job opportunities even for recent college graduates and there is no driver for jobs to be created in cubicle-land. Every dollar an unemployed person pays or borrows for so-called “education” is a wasted opportunity that unfortunately brings them a little bit closer to the day of reckoning rather than being their salvation.

Because our so-called “leaders” refuse to level with the general public about what is happening, preferring feel good bromides about “green shoots" and “turning the corner” in hopes of getting reelected, most people today continue to make bad economic decisions that will eventually cause them to become more vulnerable as times get worse. The recent high school graduate filling out a student loan application with the intention of studying liberal arts, the young couple looking at purchasing their dream home 30 miles from their jobs, the soccer mom buying an oversized SUV thinking she is keeping her children “safe” and the middle aged professional shoveling money into his 401K account while dreaming of an easy retirement are each making terrible decisions that will come back to haunt them within the next decade. All of them will eventually realize to their chagrin that had they known what was coming they should have made much different choices.

There is nothing that can be done about this phenomenon. The power of our corporate-owned and utterly compromised mainstream media is far too pervasive to be overcome by a few voices out here shouting the truth in the Internet wilderness. I note that whenever I try to discuss these issues with friends or colleagues in meat space I have to be very careful not to get too far out in front of what they are willing to hear lest they shut down on me and become totally unreceptive. Nudging them towards the truth is all I can do; most likely will not get there until it’s too late.

Worse off are those who rely on any kind of government check--be it welfare, rental assistance, food stamps, Medicare/Medicaid, Social Security or retirement payment--for their survival. The federal government’s finances are deeply out of whack and the day will eventually come when it will default on its obligations and those EFT payments will stop coming. When that happens, the ranks of those approaching doom’s critical mass will jump very quickly and our body politic will destabilize overnight. It likely won’t yet bring the system down completely, but daily life in America is going to be very difficult for most people after that, even the ones lucky enough to still be employed.

The comforting aspect of all of this for doomers is that the more prepared you are, the better chance you have to weather the coming storm. As the old adage says, you don’t have to be faster than the bear, just faster than the slowest camper. Being prepared means at a minimum getting out of debt, investing in hard assets and having some form of personal protection. Just by doing those things you will have placed your long term survival chances ahead of well more than 90% of the herd. Beyond that, it is anyone’s guess as to how long we really have left before the façade of business as usual crumbles once and for all and the onset of a powered down future becomes undeniable.
Posted by Bill Hicks at 6:08 AM