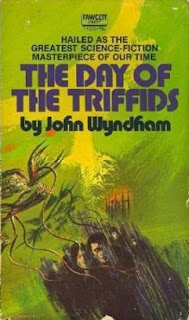 How the World Ends: Mysterious comet passes Earth, leaving nearly all of humanity blinded in its wake.

Scenario: One survivor who retains his sight battles for survival in a world rapidly being overrun with mobile man-eating plants called Triffids.

Coolness Factor: The opening sequence in which the protagonist wakes up in a deserted hospital was chilling reproduced in the movie 28 Days Later and the teevee series, The Walking Dead. British sci-fi at its best--who would have thought that a bunch of plants could be so bad ass.

Likelihood of Scenario Coming True: 0 out of 10. Since there is no such thing as Triffids, I think we can sleep soundly knowing this book, while a great read, is not a prophecy of our collective fate.
Posted by Bill Hicks at 6:28 AM