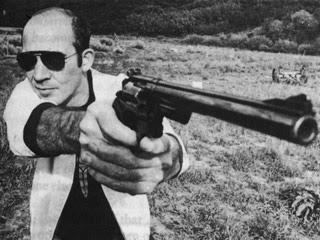 Since I started this blog, I’ve received a lot of comments from readers who say they really enjoy my writing style, which is quite gratifying because not only was I not an English major, I was actually an atrocious speller as a child and positively HATED being forced by my teachers to diagram sentences in class. As I grew older, I managed to improve my writing skills by becoming a voracious reader—and not even so much the classics, of which I will readily admit to not having read as many as I should.

Since this is Sunday and normally a quiet day on the news font, I thought I’d indulge myself a little bit and put together for those interested a little list of other writers who are my most important influences. These are literary artists who, despite writing non-fiction, use prose that grabs the reader by the scruff of the neck and demands their attention. The subject matter they write about varies considerably, but what really matters is HOW they tell the story.

So all of that said, let’s get on to the list:

Hunter S. Thompson – the fact that I’ve used the phrase Fear and Loathing in the title of a couple of my blog posts should be a clue that the good doctor is a strong influence on my writing. Because Thompson spent a long career twilight as a drug-addled caricature of himself before finally committing suicide in 2005, people tend to forget how great he was during his heyday. Fear and Loathing in Las Vegas is his signature work, the central theme of which is the death of the American Dream, a topic of obvious relevance to this blog. Just as good were many of his pieces of actual journalism produced in the late 1960s and early 1970s; from the fascinating book, Hell’s Angels, to his blisteringly insightful coverage of the 1972 presidential campaign in which the Godfather of Gonzo Journalism nailed Richard Nixon’s character better than any reporter ever did before the Watergate scandal broke wide open.

Joe Bageant – it is really a shame that the man who ought to be the pride of Winchester, Virginia, died of cancer earlier this year having produced only two books during his lifetime. Deer Hunting With Jesus and Rainbow Pie are simply MUST-reads for anyone who truly wants to understand what has gone wrong with modern America. Even as good as they are, Bageant was a rarity in that he actually did some of his best writing on his blog. From 2004 until his memorable last post in December 2010 (“America: Y Ur Peeps Be So Dum?”), no blogger out there produced such high quality prose on the ‘Net. RIP, Joe, we miss you dearly.

Mike Royko – The late columnist for three different Chicago newspapers is another guy who did much of his best work in a highly disposable medium. Royko literally cranked out thousands of first rate columns from the mid-1960s until his death in 1997. Invariably, Royko took the side of the little guy against whatever corporate or governmental forces were trying to trample him or her, and for his troubles became a permanent enemy of the Daley Machine. The collected anthologies of his columns are priceless treasures, and his one actual full length book, Boss—Richard J. Daley of Chicago, is considered one of THE best works ever written about municipal politics and corruption in America.

Bill Bryson – The author of the delightfully funny and massively successful A Walk in the Woods is a much different kind of chap than those above him on the list. Nevertheless, readers who have only experienced his lighter-hearted later works might be surprised that Bryson’s earlier stuff was actually quite biting. For me his best book is The Lost Continent, which recounts the first time he returned to the United States after 20 years of living in England and travelled around the country in an effort to get reacquainted with his roots. To say he wasn’t exactly charmed by what he saw is an understatement. His subsequent second return to America resulted in Woods—which is also a very insightful work but doesn’t pack quite as much of a visceral punch. What Bryson has always excelled at throughout his career is writing prose that reads as if he is sitting right next to you telling a story.

Tony Horwitz – Like Bryson, Horwitz was a long time expatriate American journalist who subsequently turned to travel writing. Also like Bryson, he returned to the United States after a long period abroad and hit upon a particular subject matter regarding his native land that struck a major chord with the reading public. His signature work, Confederates in the Attic, is an absolute masterpiece. Ostensibly about how the U.S. is still fighting the Civil War, the book digs deep into the American psyche in such a way that is witty, informative and unsparing. The half of the book in which Horwitz spends his time traipsing around Civil War battlefields with a nutty, dedicated Confederate re-enactor are worth the cover price alone. His other works, particularly the pre-Jamestown American history account, A Voyage Long and Strange, are also very entertaining and informative.

Jon Krakauer – I very much admire anyone who develops a great writing voice through experience rather than formal education. Krakauer was a mountaineer who started his literary career with the excellent Into the Wild, the story of a young college educated American who tosses away all of his earthly possessions before traipsing into the Alaskan wilderness and starving to death. He followed that up with the tremendous Into Thin Air, about the disastrous 1996 Everest expedition of which he was a part. But it is his next book, Under the Banner of Heaven, which shows what a gifted writer Krakauer really is. Moving beyond works of personal interest or experience, his searing expose of the Mormon Church is compellingly readable and thought provoking. Krakauer’s work may be controversial at times, but one thing it is definitely not is boring.
Posted by Bill Hicks at 7:48 AM