Fittingly, Voyager 1 Leaves the Solar System as the Last Space Shuttle Gets Ready to Launch 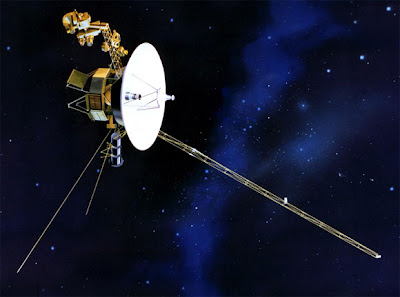 It was reported this week that the Voyager 1 space probe, currently the farthest flung made man object from planet Earth, will be leaving the boundaries of our solar system any day now. In its heyday, Voyager was a spectacular technical triumph, sending back to Earth amazing close up photographs of Jupiter in 1979 and Saturn in 1980; rekindling public interest in a space program that was seemingly running in place after the last Apollo moon mission in 1972. The unmanned space vehicle now becomes the first object of human construction to exit our solar system at almost exactly the same time that America is preparing to launch its final manned space flight, and the symbolism could not be any more apt.

No other institution more dramatically represents the rising and declining fortunes of this country in the post-World War Two period than the space program. In the early postwar days, America took advantage of the technical know-how of German rocket scientists, particularly the brilliant Wernher von Braun, who was a member of the Nazi Party and was complicit in war crimes by constructing his V-2 rockets with slave labor. Overlooking Braun’s past and using his expertise to help win the space race against the Soviet Union was a typical example of the moral compromises America often made during the Cold War period.

It was also the paranoia generated by the Cold War, rather than any desire to engage in exploration for mere knowledge’s sake, that first drove the country toward its ultimate space triumph, landing a man on the moon. The Soviet launch of Sputnik 1 in October 1957 filled America’s leadership with dark visions of orbiting nuclear platforms, and thus galvanized the political will to fund a program to catch up in the space race. This led to the launch of Project Mercury, which in 1961 sent Astronaut Alan Shepard into space just as a young and vital new president was settling into the Oval Office.

Galvanized by that success, President Kennedy promised that America would land a human being on the moon before the decade’s end, a daunting technical leap to be accomplished in a relatively short period of time. Kennedy’s words were stirring:

“I believe that this nation should commit itself to achieving the goal, before this decade is out, of landing a man on the Moon and returning him safely to the Earth. No single space project in this period will be more impressive to mankind, or more important in the long-range exploration of space; and none will be so difficult or expensive to accomplish.”

At the time, America was uniquely positioned to accomplish Kennedy’s goal. Possessing by far the most dynamic economy in the world, thanks in large part to possessing a vast quantity of easy-to-exploit oil reserves, the country had the excess abundance to allow it to undertake such a costly effort.

The 1969 landing of Neil Armstrong and Buzz Aldrin on the moon was a tremendous accomplishment, and even managed to beat Kennedy’s deadline by a few months--demonstrating once and for all what this country could accomplish when its attention and resources were properly focused. Unfortunately, the event took place against the backdrop of a bloody war that was ripping the country apart politically; the eventual end of which would be the first major blow to America’s post-World War Two prestige.

Unnoticed at the time, but of far more dire consequence, was the fact that first moon landing occurred almost simultaneously with the peaking of domestic American oil production. By the time America’s active involvement in the Vietnam War ended in 1973 we were already far too dependent on oil imports, a point that was dramatically driven home by the gas lines resulting from the first Arab oil embargo that same year.

With the costs for the Vietnam War mounting, President Nixon and a Democratic Congress conspired to quash NASA’s plans to follow up the Apollo landings by taking the next logical step, a manned Mars mission. It was at this moment, just a couple of years after the peak of American oil production, that the nation turned its back on further exploration and began a long term economic, social and political decline that continues to this day.

Voyagers 1 & 2 temporarily resurrected the illusion of progress in the space program as the decade of the 1970s came to a close. The success of the unmanned probes and the dramatic photographs they took were the last chance the agency had to rekindle public interest to the point where proper funding could be restored for space exploration, but the election of Ronald Reagan and the new anti-government, tax cutting rhetoric coming out of Washington effectively ended any hope for a reversal of fortune.

Reagan’s bashing of government and his deregulatory zeal helped create a political climate ripe for the tragedy that ultimate struck the space program during his tenure. In January 1986, Space Shuttle Challenger exploded a few minutes after liftoff, shattering NASA’s previous glittering reputation as a “can-do” agency. There had been accidents before, most notably a fatal fire aboard Apollo 1, but nothing on this order of magnitude.

The cause of the disaster was ultimately found to have been the faulty design of a key component supplied by a contractor combined with an overly ambitious flight schedule. In other words, NASA being forced to do things on the cheap while trying to maintain appearances was what ultimately doomed the Challenger. More telling is what happened to the contractor, Morton Thiokol, which “voluntarily accepted” the forfeiture of a $10 million incentive fee in order to avoid being forced to accept liability for the disaster (according to Wikipedia), a foreboding sign of the complete lack of corporate accountability we see in America today.

Since the Challenger disaster, the space program has limped on for another quarter century, becoming more and more irrelevant with each passing year. By February 2003, when another Space Shuttle was destroyed upon reentry, ironically shortly before the beginning of yet another grievous and unnecessary American war, the country seemed to almost take the latest major blow to its prestige in stride rather than see it as a sign of terminal decline. The following year, President Bush announced the impending end of the Space Shuttle program in true Orwellian fashion by issuing his Vision for Space Exploration.

Plans are still on the books to go forward with the Orion program, alleged to be the next generation of space vehicle, and the latest mantra is that the private sector is now going to take over from NASA in propelling the era of manned space flight forward. The obvious logical flaw in such an arrangement is, of course, that space flight is very costly and has no real commercial application beyond the ambitions of a few wealthy “space tourists.” Clearly, in this “age of austerity” the resources are not going to be available for continued advancements in space exploration, and thus the era of American manned space flight comes to an inglorious end just as the economy is slowly imploding from the effects of the peak in oil production moving on from our country to embrace the rest of the world.

Someday, a hundred years from now perhaps, tales will be told to young children around the evening campfire of a fanciful time when human beings actually walked upon the face of the moon. Sadly, those stories will likely be treated by those youngsters with the same sense of wonder and yet innate disbelief as the legends of the Greek gods of mythology are today.
Posted by Bill Hicks at 6:47 AM