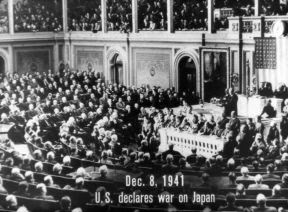 More political theater played out in Washington this week as a restless Congress woke up from an extended hibernation and was displeased to realize that the nation’s chief executive had engaged its military in yet another undeclared war, this time against the Madman of Tripoli, Muammar Gadaffi. First there was the spectacle of ten congressmen, led by the unlikeliest pairing since Danny Glover and Mel Gibson in Lethal Weapon—Democrat Dennis Kucinich and Republican Ron Paul—suing in federal court to stop the Libyan action until such time as President Obama manages to go through the motions of obtaining Congressional approval. Then there was the orange tinted Speaker of the House himself—looking like the Yao Ming of the Oompa Loompa clan—drawing a line in the sand saying that Obama needed to provide a justification for the Libyan attack by Friday or he would—I dunno, de-friend him on Facebook or something.

All of this expended hot air may have been great grist for the 24-hour cable “news” shows, but as with most such posturing in the imperial capital, it was just sound and fury, signifying nothing. Congress long ago abdicated its responsibility for deliberating on the most gravely serious action any nation can take—going to war. It’s been a good three decades since I took high school history, but if I recall correctly from when we studied the Constitution there was some obscure passage in there about how only Congress can actually declare war.

The last time that particular archaic Constitutional provision has been used was in 1942, when Congress voted to declare war on Romania in the midst of World War Two. Incidentally, that last formal war declaration happened exactly five years before the old Department of War was magically transformed in true Orwellian fashion into the Department of “Defense” in 1947. Coincidence? I think not.

Since that last time a war was formally declared, America has engaged in countless military actions, including major land wars in Korea, Vietnam, Kuwait, Iraq and Afghanistan—not one of which was “defensive” in nature. In each of the aforementioned conflicts, the president sought some sort of approval from Congress before committing American troops, most notoriously with the Gulf of Tonkin Resolution in 1965 that led to the use of combat troops in Vietnam.

So why no more formal Declarations of War despite there being at least five occasions in the post-World War Two era in which it should have been appropriate? We could probably debate that question all day. Certainly, the abdication by the legislative branch to properly fulfill its duty in this area was a significant early downward step towards this nation’s Constitution being reduced to a “damn piece of paper,” in the words of a recent Oval Office occupant.

There was one attempt awhile back by Congress to regain at least some of its authority in this area. Having been burned by Lyndon Johnson on the Gulf of Tonkin Resolution, Congress decided as the Vietnam War was winding down to try to reassert itself by passing the War Powers Act of 1973, which (according to Wikipedia):


“Requires the President to notify Congress within 48 hours of committing armed forces to military action and forbids armed forces from remaining for more than 60 days with a further 30 day withdrawal period, without an authorization of the use of military force or a declaration of war.”

In all of the bluster coming out of Washington this past week, it was noted that as of May 20, 2011, the 60-day period for the Libyan campaign had passed with no such authorization requested from President Obama. Obama’s argument is that the 60-day limit does not apply because this is a “NATO campaign” and that the use of U.S. forces is “somewhat limited.”

Well, far be it from me, a nobody blogger sitting on the couch in my basement, to argue with a former Constitutional Law professor and his best and the brightest legal team. In fact, I have no desire to engage their argument because their insistence on rhetorically dancing on the head of a pin really doesn’t matter, at least not from a Constitutional standpoint.

What matters is that Congress has a very simple method by which it can reassert its authority once and for all, a method spelled out very clearly within that very same Constitution: it can draft and approve Articles of Impeachment against President Barack Obama. The Libyan campaign is an undeclared war in which the president has not even deigned to ask Congress for approval as called for by the War Powers Act. If Congress really wishes to reestablish the checks and balances called for by the founders, all the silly lawsuits and public posturing in the world don’t mean a damn thing. Impeachment is the one and only option. After all, it was put into the document by the founding fathers first and foremost as a method of reigning in an out-of-control chief executive.

Will impeachment happen? Not a chance. The Republicans are scared to death that it would boomerang on them politically like it did with Bill Clinton, and antiwar Democrats like Kucinich are hardly likely to vote to impeach a president of their own party. Sadly, ever since the 9/11 terrorist attacks, America’s chief executives have been becoming more and more brazen about blowing off our constitutional safeguards as they pursue the Global War on Terror (or whatever it is being called this week). Bush started it and Obama has doubled down on essentially daring Congress to do anything to stop him.

We the people, who stand to lose the most in the face of unfettered executive power, should demand impeachment, but of course we won’t. Many on the right would rather obsess about the media-manufactured and completely irrelevant Birther controversy, while many on the left would immediately charge that anyone advocating for Obama’s impeachment must be a racist. And so nothing will happen. The politicians will dither and bicker as they always have, American bombs will continue to drop on Libya and that damn piece of paper will take another small step towards utter irrelevance.
Posted by Bill Hicks at 7:40 AM