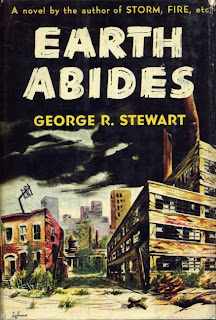 How the World Ends: Super epidemic wipes out most of humanity leaving only very scattered survivors.

Scenario: Protagonist tries to maintain the memory of civilization as the leader of a post-plague community.

Coolness Factor: Despite being over 60 years old, Earth Abides holds up very well as a work of post-Apocalyptic science fiction. The story begins as a last man alive tale, turning more philosophical once the protagonist begins to assemble a tiny band of survivors scratching out a living among the ruins of San Francisco. As the story progresses the protagonist tries to instill in the youth of the struggling new community the knowledge the old world, only to find that it becomes increasingly irrelevant as time passes.

Likelihood of Scenario Coming True: 3 out of 10. A worldwide pandemic is among the more plausible doom scenarios, and Stewart’s observations of the tribalism that would arise among the survivors is chillingly realistic.
Posted by Bill Hicks at 6:16 AM