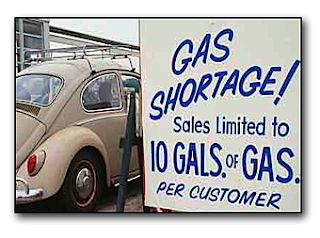 Perhaps I am atypical, but I’ve always been hypersensitive to what’s going on around me in the real world. Among my earliest childhood memories are the gas lines that followed the 1973 Arab oil embargo; the event which probably planted the seed that sprouted into awareness of peak oil during my fifth decade on this planet. Despite being just a kid at the time, I was keenly aware that my family’s cars needed that gasoline that was being rationed, and we furthermore needed those cars to do just about everything that was important--from my dad getting to work in the morning, to me getting to school, to my mom going grocery shopping every weekend.

My heightened awareness is likely also the reason why I still have vivid memories of a headline that appeared in our local small town newspaper one day several years after those gas lines had abated. The headline read in stark simplicity: “60 to 90 Years' Supply of Oil Left,” and it really grabbed this thirteen-year-old’s attention. Being a thoughtful youth, I did a quick mental calculation and realized that if the headline was accurate it meant if I was lucky there was a chance I would not live to see the end of the oil age.

Flash forward to middle age, and while researching this article I unearthed a reference to what it was that generated that headline from so many years ago. According to a Time magazine story published in October 1978, the source of that “60 to 90 year” figure was an official report produced for the Central Intelligence Agency by Richard Nehring, a policy analyst for the Rand Corporation. The Time article, entitled “Oil: What’s Left Out There?” centered on two basic questions: “How much oil does the world have left?” and “When will it run out?”

These were hotly debated topics at the time. The article points out that President Jimmy Carter, in his drive to get an energy program through Congress, had been relying on a previous CIA analysis estimating that world oil supplies would be depleted by the end of the 1980s. Nehring’s report, therefore, represented a considerable change from the agency’s previous thinking on the issue and also had important political ramifications.

What strikes me looking back in hindsight is just how accurate Nehring’s prediction has turned out to be. It is now nearly 33 years later, and the general consensus among Peak Oil analysts today is that the world has something on the order of 35-40 years of remaining oil supplies at current consumption rates (putting aside the fact that production rates will no doubt fall well before then). Add those two figures together and the headline that grabbed my attention when I was a kid will hit almost the exact middle of its 60-90 year target range.

Even more telling is what the Nehring paper had to say about how his prediction would be affected by increasing oil demand: “If demand does increase and supplies are being used up more quickly, Rand experts believe that energy requirements could still be met through conservation measures and the use of special techniques to squeeze more oil out of existing reserves.” Done and done. Conservation through greater efficiency in the early 1980s caused oil consumption to actually fall for awhile and special techniques are now used to extract more oil from older fields.

Nehring’s credibility is further enhanced by a caution added to his relatively optimistic analysis: “the world's reserves can really be significantly increased only by additional recovery from known fields and by further discoveries of ‘supergiant’ fields containing at least five billion barrels of oil.” As we now know, the former has become standard practice while the latter has not occurred at all. In fact, the Rand report noted at the time that new discoveries of supergiant fields had already almost completely tapered off.

The Time article goes on to list the reasons why the oil crisis seemed somewhat less dire a half-decade after the appearance of those first gas lines. Among the factors cited was the development of already discovered supergiant oil fields in the North Sea, Alaska and Mexico, which we now know were largely responsible for oil prices returning to their pre-oil shock, inflation-adjusted norms during the 1980s and 1990s.

So what do we learn from this little detour through the recent past? First and foremost, the evidence is right there in black-and-white that America’s political leadership has for the past third of a century had available at its disposal a highly accurate prediction from its own intelligence analysts as to how long conventional oil supplies were likely going to last. The fact that the more dire previous predictions regarding oil production relied upon by Carter were just then being overtaken by positive developments in the oil industry did not lessen the obvious need for long term planning to prepare the nation for the inevitable day when the oil would run out for good.

History records what happened next. Despite being the last president to take oil depletion seriously as a political issue, Carter hedged his bets and issued the Carter Doctrine, making it American policy to guarantee uninterrupted oil shipments from the Middle East, by force if necessary. Among his opponents during his 1980 reelection bid was Republican Congressman John Anderson--running as an independent—whose platform called for even more drastic conservation measures like a 50 cent a gallon gasoline tax (equivalent to about $1.50 a gallon today). Both men were of course defeated by Ronald Reagan, the first candidate to run on the notion of unfettered American exceptionalism, including the ludicrous idea that even geologic reality could be overcome by enough positive thinking.

For over three decades Americans have been living in a dream world created by politicians of both parties and reinforced by our mainstream media. Despite some indications that cracks are beginning to appear in the façade, most people have yet to awaken to peak oil reality. The guy driving the Hummer with the “Drill, Baby, Drill” bumper sticker plastered on the back is just as firmly in denial as he ever was. If you don’t believe me, read the comments section below any mainstream press Internet article about high gasoline prices and you’ll see more than you’ll likely ever care to see of the infantile mindset that still predominates among large numbers of our fellow citizens when it comes to energy issues.

As yet another quadrennial political spectacle begins to unfold before us, we must lament the fact that no serious candidate vying to take the presidential oath of office on January 20, 2013, has publicly acknowledged the stark realities of peak oil and resource depletion. Those of us in the peak oil movement are now also aware, of course, that oil production is going to drop off steeply long before we reach Nehring's projected date range for supplies to run out. What was once an inconvenient truth stubbornly denied by Reagan in the name of short-term political advantage is now emerging as the most serious crisis this nation has faced since its founding. That this is so should not come as a surprise to anyone. After all, we were given a very clear warning about what’s coming all the way back in 1978.
Posted by Bill Hicks at 8:07 AM