Friday Rant: Thinking of Making a Presidential Campaign Contribution? If So, You’re an Idiot 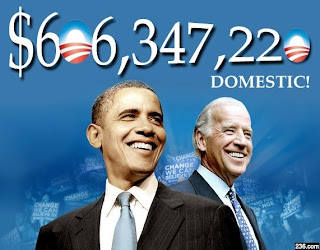 I am going to start off today’s Rant by making an assumption. I know, I know, that’s a dangerous thing to do--making an ass out of both you and me and all that. But I think this assumption is a safe one. I’m going to presume that if you are reading this blog you aren’t a Wall Street trader, or a hedge fund manager, or the CEO of an international conglomerate, or the CFO of one of the big banks, or anyone else who makes an obscene amount of money by gutting the real economy and destroying the livelihoods of American blue collar and middle class workers. Pretty good assumption? I thought so.

Because if you are not someone in one of those categories, or someone who runs in the same social circles as the people in those categories, yet you still insist at some point within the next 18 months on wasting your hard earned money donating to one of the Presidential campaigns you are, to put it charitably, an idiot.

Oh I’m sorry, did I hurt your feelings? Well, go ahead and walk it off, Sunshine, and then come back here and sit down. What I am about to tell you is for your own damn good.

Let me spell out for you the most important fact you need to know about the upcoming election: Obama is expected to raise over $1 billion for his campaign. I’ll let that sink in for a moment. That’s right…(cue Dr. Evil)…One…Beeelion…Dollars.

So exactly where exactly do you think Mr. Hopey-Changey is going to raise all that cash? If you say from the same small donors who formed the backbone of his fundraising efforts last time around I swear I am going to get my big wooden paddle with the little holes carved in its face and spank your behind. Seriously, you really ought to know better. It’s probably indiscrete to mention this at any well-heeled tony suburban party in between servings of fine brie and glasses of cabernet sauvignon, but Obama’s biggest campaign contributor in 2008 was Goldman Sachs, which was described thusly by Rolling Stone reporter Matt Taibbi: “a great vampire squid wrapped around the face of humanity, relentlessly jamming its blood funnel into anything that smells like money.”

Still not convinced? Okay, how about the fact that Obama was the American politician who received the most campaign cash from British Petroleum right up until the summer of 2010, when he and his administration allowed that foreign company to spray millions of gallons of toxic chemicals into the Gulf of Mexico to “hide” all the crude oil that was inconveniently spewing forth from the ragged hole the firm managed to rip into the sea floor? But hey, Obama is so much smarter and far more articulate than that dipshit Bush. That’s counts for SOMETHING, right?

Obama has one political trick up his sleeve, a sleight-of-hand that works every time no matter how often he fleeces the suckers, and that is his ability to point to the other side—at the shady collection of hucksters, frauds and moral cretins lining up to challenge him—and say, better me than any of them. That’s all it takes to cause any good liberal who is thinking about straying from the fold to get a vision in his head of a Christo-fascist America in which Muslims, gays, feminists, atheists and MSNBC viewers are promptly rounded up the day after the next inauguration and sent to reeducation camps where Fox News is on the teevee screens in every room 24/7 and they are forced at every meal time to recite the Pledge of Allegiance to include the phrase “under God.”

But wait a minute, you say. I want to see Obama receive the sound electoral thrashing he so richly deserves and I want to do my best to help ensure that happens. Well, aren’t you just the cutest thing. Let me know how that works out. Cause who exactly are you planning to give your money to? Palin? Romney? Gingrich? Pawlenty? If anything, that group of whores is even more willing to get gangbanged by the big money capitalists than our intrepid commander-in-chief. If you think any of them are going to give you change from the change we can believe in, you are even more delusional than Kristie Alley is about her figure.

No, no, no, I hear you pleading. Not any of those twits. I’m proudly giving my campaign contribution to Ron Paul. He’s the man who can bring REAL change.

Sigh. Nothing personal--I’ve said before on this very blog that I like the good doctor. He hates America’s war and empire foreign policy every bit as much as I do. But it is precisely BECAUSE he hates it that Ron Paul is NEVER going to be the nominee of the Republican Party let alone President of the United States. The Republicans tolerate Ron Paul the way a family tolerates a slightly deranged senior citizen uncle, mostly because he helps keep many libertarian types within the party fold. But if it ever looked like Ron Paul could actually do anything more than sit at a picnic table during the family reunion holding a deep conversation with the potato salad, the corporate forces who underwrite the party’s national campaigns would conspire with the party leadership to squash him like a stink bug that had gotten into their living room.

Look, I get it. You hate what America has become in recent years and you want to help turn things around. I used to be like you once. I even donated to a couple of presidential campaigns back before I realized that it’s all just a game and the result is the same no matter who wins. That is the very essence of modern two-party “democracy.”

You just have to learn to let it go. Do something nice for yourself with that cash. Buy yourself a little something. Hey, I have an idea. How about a couple of cases of pork and beans so you’ll at least have something to eat after the economy crashes? Really, Obama, Pawlenty and the rest of them will manage just fine without your dough. Trust me.
Posted by Bill Hicks at 6:07 AM