Friday Rant: Traitor to My Class (and Damn Proud of It) 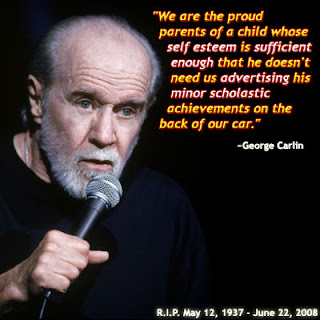 Editor's note: this might be the beginning of a new Friday feature here on The Downward Spiral blog, or it might just be a one off--I haven't decided yet.

I hate the upper middle class. Which is kind of funny because by any income-related statistical measurement (if not actual lifestyle) I am one of them. I reside in Fairfax County, Virginia, which perennially makes the list of the top five richest counties in the country based upon average income. Most of the people I know are upper middle class. They work at jobs where if they ever break a sweat they can just turn up the air conditioning, and not a one of them would be caught anywhere within a 100 miles of a NASCAR track. And while I like plenty of them as individuals, as a collective whole they really turn my stomach. Not so much because of how they act but because of their general obliviousness to the severe economic distress being felt by so many of their fellow citizens and because many of them claim to, you know, really care.

If you watch MSNBC, or the Daily Show, or read lefty blogs like The Daily Kos or Think Progress, you likely have seen and heard a lot of bashing of wealthy conservative boogiemen like Rupert Murdoch and the Koch Brothers. Tax the evil Randian elite and distribute the wealth to the masses, is the message. That will solve all of America’s economic problems so you dear reader/viewer can stop your fretting and go back to your latte-sipping, soccer mom lifestyle confident that your righteous faux outrage has helped to save the world.

It’s a great message to sell if you are trying to goose your ratings or your readership among conventional well-to-do lefties, the kind of people who were enthusiastic supporters of Obama in 2008 and will constitute his (perhaps now somewhat less enthusiastic) base as he cranks up his reelection campaign. Problem is, it’s complete bullshit. Even jacking up the top income tax rates back to where they were after World War II (over 90%!) along with hiking capital gains taxes would not be enough to close even the current federal budget deficit, let alone restore the increasingly desperate state governments to fiscal health.

But cognitive dissonance is a rampaging epidemic among my fellow upper middle classers. These are people who claim to be concerned about climate change, for example, but feel they absolutely need that giant SUV with the video screen in the backseat to keep their precious little snowflakes safe and entertained while being chauffeured to and from the shopping mall. These are people who say they care about the downtrodden but for whom life is not complete without a lawyer foyer, granite countertops, a kitchen island, surround sound entertainment system, flat screen teevees in every room and a half acre patch out back onto which their lawn service can dump a Bhopal’s worth of chemicals every summer.

They can’t imagine how they could make it through life without the daily trip to Starbucks, the weekly trip to the organic grocery store or the annual vacation to the latest trendy place where they can whip out their plastic and bring back another beaucoup load of useless crap they don’t need. If the local school system is found wanting, they’ll yank their little snowflakes out of there—for NOTHING in my experience can turn a progressive soccer mom into a stark raving Randian faster than any perceived threat to her kid’s education. They are easy to spot out in public, these fake liberal fucks, spending their days chattering and texting on IPhones and Blackberries that didn’t exist ten years ago but have become as indispensable to their lives as oxygen itself. For them, life is an experience to be carefully cataloged on their Facebook pages and inanely commented upon by friends just as superficial and shallow as they are themselves.

And that’s just the liberal breed of upper middle classers. The conservative ones are even worse. And whether they are Democrats or Republicans; Keith Olbermann fans or loyal flag-waving followers of Bill O’Reilly, they all share one big trait in common: none of them have any fucking clue that the cheap-oil fueled extravaganza that enables their spoiled, entitled lifestyle is quickly coming to an end. Their denial runs so deep that if you tried to warn them about what’s coming they would dismiss you as a crank or accuse you of not engaging in positive thinking. These are people for whom provable facts are irrelevant if they do not fit into their world view. Say to your average sensitive, male metrosexual that Obama’s unwarranted attack on Libya makes him as big a war criminal as Bush and he will stare at you uncomprehendingly. Or if he’s a NFL fan and a teabagger he likely believes that the Libyans have no business living on top of America’s oil, even if he might not say that out loud.

I’m not a big “solutions” guy, at least not for big picture stuff that is well beyond my puny control as an individual. But since so many of my fellow upper middle classers seem to believe that if you sign enough petitions or send enough e-mails to your local CONgresscritter you can effect positive change (there is no utterly meaningless phrase in the English language I would more like to nuke into oblivion than “effecting positive change”), I am going to offer some solutions for how we can handle these people.

First, tax the holy hell out them. While we’re jacking up the rates on the evil Koch brothers, let’s not leave the upper middle class unscathed. Did you know that social security taxes are capped after the first $106,800 of annual income? Most people don’t unless they are one of the fortunate few who make enough money to hit that limit every year. When it happens it’s like getting a big pay raise. Whoo-hoo! Let’s go get that new IPad, honey. What’s that? The Social Security “trust fund” is a lie and the program is insolvent, you say? Not our problem, dude. We’re going to the mall. It’ll work itself out before WE retire. At least it better. The government OWES us that money.

Better yet, let’s do some specifically targeted taxing. McMansions and big ass SUVs to start. Wanna live in a cheaply built oversize palace 40 miles from your job? It’s gonna cost you, Biff & Buffy. How about a big tax on all of that ICrap and other electronic devices? Producing that shit in China and shipping it all over the world is sucking down scarce resources as well as massively polluting the environment there, Mr. & Mrs. Greenwannabees. Maybe if you can’t afford another distracting gadget, you’ll actually have to start TALKING to one another again. The horror! And while we are at it let’s also tax all the damn soccer fields too, because you know, fuck that boring ass Commie sport already.

What’s that I hear you saying? “Bill, those are hardly practical or constructive solutions.” Yeah, well, it’s my blog. And a man can dream now and again, can’t he?
Posted by Bill Hicks at 1:20 PM