Blowing Up the Levee Won’t Save Cairo, Illinois

This past week, the forgotten Illinois river town of Cairo (pronounced “Kay-Ro” for some strange reason) made national headlines for being “saved” from imminent inundation by the surging Mississippi River when the Army Corps of Engineers decided to blow a downstream levee and instead send the floodwaters onto a vast stretch of Missouri farmland. Unfortunately, however, even this controversial action won’t save the town of Cairo. Cairo has been dying for years, the victim of a predatory American economic system that no longer values what once made this country a great nation.

This story struck a chord with me, not because I have ever visited Cairo, but because I was born and raised in another rust belt Illinois town that has seen a similar if less dramatic decline in recent decades. Once a thriving river port, Cairo has descended into a postindustrial hellscape. Looking at pictures of the once vibrant downtown area, you’d be hard pressed to know you weren’t actually looking at images of Detroit: 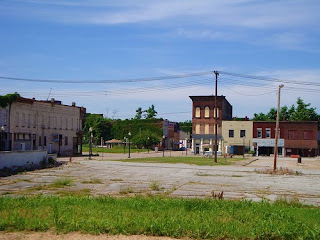 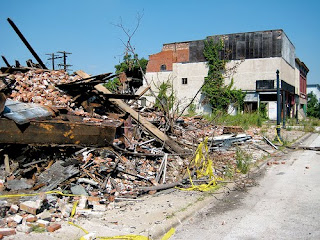 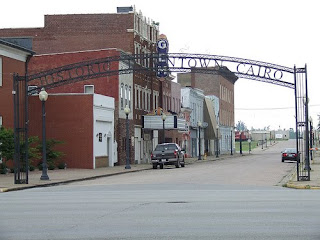 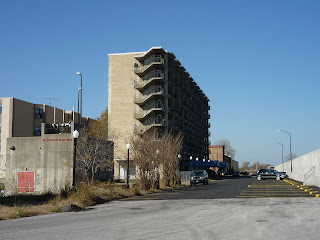 Like Detroit, much of Cairo’s population has disappeared along with its base of good paying blue-collar jobs. After peaking at 15,203 in the 1920 census, Cairo tumbled all the way to 2,831 residents in the most recent decennial count. There was time in America when a man (they were usually men) could pull on his work boots in the morning, spend his day performing physical labor in a factory, on a construction site or on loading dock and come home to his family having earned enough money to put food on the table, keep a roof over their head and plan for their future.

Those days are sadly gone, along with the vitality of once vibrant communities like Cairo, Illinois. What killed Cairo wasn’t the rampaging river, but several generations of greedy, globalizing predatory capitalists working hand-in-hand with duplicitous, bought-and-paid-for politicians. This unholy cabal lined its own pockets with wealth strip mined from places like Cairo.

The Army Corps of Engineers may have succeeded in saving the physical husk that is Cairo, but the heart and soul of the town was ripped out a long time ago. And before anyone living a comfortable suburban existence somewhere shrugs their shoulders and insinuates that this is the price we pay for “progress,” I want them to take another good look at those photos. For today it may be Cairo or East St. Louis, Illinois, or Gary, Indiana, or Camden, New Jersey, or Detroit, Michigan. But tomorrow, after the effects of Peak Oil really start to bite, it will instead be those communities that are not viable without automobile transportation, like Du Page County, Illinois, or Anaheim, California, or Phoenix, Arizona, or Orlando, Florida, or Fairfax County, Virginia.
Posted by Bill Hicks at 10:23 AM