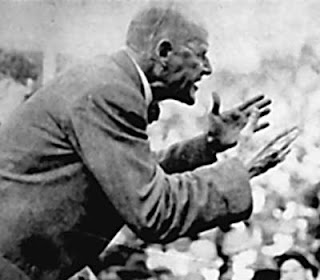 When I was 21-years-old, I did a potentially very dumb thing that turned out to be the smartest move I have ever made in my life. I raised my right hand at the Military Entrance Processing Station in Chicago, Illinois, and took the oath that served as my formal induction into the Illinois Army National Guard. At the time I was young and stupid and had no idea what a huge gamble I was taking, but fortunately for me it paid off.

It was the mid-1980s, and my circumstances were typical for a small town kid who had lived a fairly parochial existence and had no freaking clue what he wanted to do with the rest of his life. Being behind the times is the essence of small town life, and I spent many nights bumming around in my old Plymouth Duster with the kicking 8-track player—unkempt long hair hanging down near my shoulders and skinny torso clad in a black concert tee-shirt. Like most of my friends, I was a Led Zeppelin kid stuck in the decade of Duran Duran.

To make matters worse, I was also an underachiever who had coasted his way through high school and then bummed around the local community college for a couple of years—not because I had any burning desire to keep going to school but simply to forestall the onrush of an adulthood that I knew deep down I wasn’t ready to handle. Eventually, I finished my Associate’s Degree and reached a crossroads where my dad threatened to kick me out of his house if I didn’t move on to university.

Problem was I didn’t have the money and dad couldn’t afford to pay my tuition. I knew student loans existed, but I’d never been in debt before and even back then I had a deep phobia about owing other people money. The military was an option, but only if you were willing to give up four years of your life. Then one day I received a brochure from the Illinois Army National Guard promising a full tuition at any state school plus a GI Bill monthly stipend if I enlisted for six years. I was immediately sold since the part-time commitment required of a Guardsman meant I wouldn’t have to wait until I was in my mid-20s to complete my studies.

So that fall, instead of returning to school I headed off to infantry basic training at Fort Benning, Georgia, and got what every aimless young person needs—a bucket of icy cold water called reality dumped right over my head. For I may have been NG (or “No Go” as we were derisively called), but at Benning we were mixed right in with the regular army pukes. It is an understatement to say I didn’t belong in a place where having attended a couple of years of college was not only not an advantage but actually carried a significant stigma. The drill sergeants and even many of my fellow recruits took great delight in humiliating me whenever they could. I also didn’t realize before I got there how fundamentally disadvantaged I would be, having never before fired any type of firearm and having been pathologically allergic to push-ups back during high school gym class. Every day was a struggle, and more than once I thought I was going to wash out.

That’s not to say that all of the guys I met during basic were assholes. Some of them were really good people, especially the ones who were not there because some judge had given them the choice: Army or prison. But even among the ones I liked I sometimes felt out of place.

There was this one guy about my age. He was from Alabama and had a thick southern accent I sometimes had difficulty understanding. I had never met anyone from Alabama before, but he was cool and we palled around a little bit. One day, and I have no recollection how we got on the subject, I for some reason started talking about the theory of evolution. My buddy got this peculiar look on his face and said, “Wait just a minute. You’re trying to tell me that man descended from the APES?” He wasn’t angry or anything. Fact was, not only did he not believe in evolution, he had never even HEARD of it before. For days afterward he kidded me, “man descended from the apes. That’s a good one, dude!” After that, I learned to keep any such intellectualism out of my casual conversation.

Somehow, despite feeling as out of place as Boy George at a Klan rally, I learned to do all the stuff you need to do to be a soldier. I qualified expert with my M-16a1 rifle without shooting myself or my instructors, didn’t blow myself up on the grenade range and actually enjoyed the feeling of power that comes from firing a .50 caliber machine gun. The drill sergeants took glee in dropping me for push-ups more times than I cared to count, but that actually helped me pass the final PT test. Ultimately, I made it through the training…by the skin of my teeth maybe, but I did make it. And probably the best revenge on those who had tormented me was that after graduation they had to go schlepping off to some shitty Army base, while I got to go home and merely had to report to the neighborhood Armory a couple of weeks later.

The best part was that I now had my full Guard scholarship in hand, and two years later I would graduate from university completely debt free. And weirdly, though I had passionately hated my early military days, after I returned to my home unit my National Guard career actually flourished. By the time I was discharged six years later I was a senior NCO and the First Sergeant had been bugging me for years to go to Officer’s Candidate School. Most importantly, it is no exaggeration to say that I would not have been nearly as successful as I’ve been in life had the military not kicked me in the ass and given me direction just when I desperately needed it.

So you can imagine my dismay during the summer of 2003 when the body bags containing National Guardsmen started returning to the U.S. from that awful war in Iraq. Some of the newly dead were guys in their 40s and 50s, no doubt family men very similar to the kind of guys I served with after I returned to my home unit. The majority of the Guardsmen I served with were blue collar types who were not in the Guard to pay for college like I was but to earn a little extra money to provide for their families. They busted their hump all week working at the local factory or prison and then sacrificed one of their weekends each month swatting mosquitoes in the woods while going through the motions of being soldiers.

It used to really piss me off whenever someone would say as an excuse for the Guardsmen being sent to war that anyone who took the military oath KNEW that they could one day end up in a war zone. I can tell you from personal experience that NOBODY in my unit ever expected to end up on the front lines overseas unless it was a dire national emergency. It was always understood that our first mission as Guardsmen was civil defense, and that if a major war DID break out we would be assigned to domestic military bases to replace the regular army units that were being shipped out to do the fighting. We were supposed to be reserves, and training one weekend a month and two weeks during the summer was hardly adequate to prepare a bunch of middle aged part time soldiers for the rigors of combat.

It seems like a little thing compared to all of the other horrors that arose out of that awful war, but what happened to the National Guardsmen and reservists over there was nothing short of a betrayal by our nation’s so-called “leaders.” And of course, there is the supreme irony that the Guardsmen were sent to Iraq by an arrogant martinet of a president who as a young man had used his daddy’s influence to get into the National Guard in order to escape going to war himself.

When I look back upon all of this, I remain grateful that I made the choice to join the National Guard. But I also realize just what a dumb chance I was taking with my future. Had I been born just a few years later it could have been me slogging through the desert trying to dodge IEDs, and it just as easily could have been my body shipped home in a coffin with an American flag draped over it. And that too would have been fine had the cause been just and proper, but it was in fact neither.

It pains me whenever I see one of those military recruiting commercials emphasizing that the recruits will be able to pay for college as a result of their service. In these desperate economic times, the golden ticket to the middle class has become more elusive than ever before. Those commercials and the military recruiters are selling the promise of a bright future to an increasingly desperate base of working class youth, not for the protection of home and hearth, but to perpetuate a worldwide empire and secure resources for the primary benefit of Wall Street. Sadly, in this era of Peak Oil and resource depletion, even if those young men and women manage to survive their service unscathed they will return to a homeland in which the door to their dreams of middle class respectability will likely have been closed to them for good.
Posted by Bill Hicks at 8:32 AM