Peak Exploration: The Apollo Program and the High Water Mark of Western Civilization

Those of us who are what we call Peak Oil Aware have come to accept the idea that there are natural limits that will inevitably curtail economic growth and development. A long time argument among Peak Oilers is: when will this happen or has it happened already? Then it all comes down to your definition of what Peak Oil means. If you believe it means the peak in world conventional crude oil production, for example, then the Peak apparently happened back in 2006.

But what is really at issue is not the oil itself, but the peaking of human civilization and progress. After all, if a viable form of green energy really did exist, the peak of oil production would be little more than a historical footnote. So how then do we measure Peak Civilization? If we’re talking about world population, for example, then not only is the Peak NOT here but we are in fact still adding people to this old world at a net rate of about 80 million per year.

It is my contention that by one key measure Western Civilization, with all of its emphasis on eternal growth and expansion, peaked over 40 years ago and has been on the downward slope ever since. Many would scoff at the notion that American society reached its high point back when Tricky Dick was just settling in behind his desk in the Oval Office. To them, I humbly present what I call the moment of Peak Exploration: 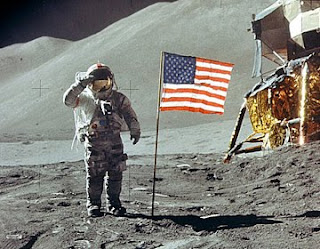 It is incredible to think that 42 years have passed since Neil Armstrong took his one giant leap for mankind. A few years after he uttered his immortal words, on December 7, 1972, Apollo 17 was launched, which turned out to be the final moon landing and likely the last time human beings will ever stride upon any world other than this old Earth. Sadly, that last Apollo flight also marked the effective end of the age of exploration.

For over six hundred years until the late 20th century, Western Civilization had been pushing the boundaries of human exploration. It started with legendary ancient navigators like Columbus and Da Gama and achieved its ultimate triumph that day in 1969 when Armstrong and Buzz Aldrin planted the Stars and Stripes on the Sea of Tranquility.

Within a year of the original moon landing, however, Richard Nixon and a stingy Democratic Congress made the joint decision to slash NASA’s budget despite the outstanding success of the Apollo program. It was the original age of “austerity” in Washington, and it reduced NASA’s dreams of a Mars mission (the next logical exploration step) to the ineffectual Earth orbit-bound boondoggles that became Skylab and the Space Shuttle program.

The need for austerity was, of course, brought on by a previous generation of military misadventures in Southeast Asia, but looming silently in the background was the specter of America hitting the upper limits of its own domestic oil production even as the Apollo astronauts were creating footprints in the lunar dust. The downside of M. King Hubbert’s first predicted Peak turned out to be a cruel mistress for America, and indeed the first Arab oil embargo and resulting gas lines would hit the country less than one year after Apollo 17 returned from the lunar surface.

Many might still remain unconvinced and would point out that we humans have made many technological innovations since the ending of the Apollo program, especially in the area of computer technology (it is actually astonishing to consider that the memory capacity of the Apollo’s ship board computers was a mere 36,000 words!). But though IPods, IPhones and IPads are technological marvels, they hardly represent a great leap forward in mankind’s achievements.

The real measure of human advancement has always been in our insatiable desire to explore and expand our horizons. Exploration as a human endeavor effectively ceased for good after 1969. In a way, the recent development of all that ICrap is perfectly appropriate for distracting individuals of a society that long ago reached the limits of what it can achieve and now has no real future to look forward to.
Posted by Bill Hicks at 11:58 AM