States to the Unemployed: Drop Dead 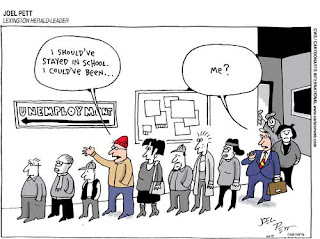 There was a news story published a couple of days ago reporting that many states are now in the process of cutting back unemployment benefits even as the nation is still mired in the worst employment downturn since the Great Depression. I would like to have linked to and quoted that story here, but it was put out by a certain wire service that frowns mightily upon us bloggers doing that kind of thing. That said, the details of the story really aren’t what’s important. What’s important is the widespread additional suffering this will cause among former blue collar and middle class workers who have been cast out from their jobs as the result of rampant Wall Street speculation and greed combined with the rampaging economic side effects of Peak Oil.

What neither group, nor any of our so-called “leaders” will stop to consider is that there are no good answers here. My personal opinion, like it has any bearing on anything whatsoever, is that as long as the U.S. is squandering countless billions every year on pointless wars and other excessive “defense” spending we still can afford to flip a few shekels to those unfortunate souls whose livelihoods have been ruined by the predatory capitalism that is utterly destroying our economy from the inside out. One of the more hideous rhetorical points bouncing around Washington these days is the bipartisan praise being bestowed upon blow-dried, empty suit, Randian stooge Paul Ryan for the “courage” of his recent budget cutting proposals. Absolute bullshit. A “courageous” proposal by Ryan would have slashed massive amounts of Pentagon spending, as that would resulted in the termination of the little twerp’s campaign bribes…er, donations from the giant contract companies who grow as fat and happy as engorged ticks on its wasteful largess.

Nevertheless, even if I were to somehow magically get my way and Congress would suddenly experience a collective outbreak of common sense regarding out-of-control military spending, it would not begin to solve the real problem. First of all, even taking the drastic step of eliminating the Pentagon altogether would not balance the federal budget, let alone begin to reduce the national debt. Secondly, it is sad to say but there will come a day when so-called “entitlement” spending, those direct transfer payments from the federal government to individuals, will have to be dramatically reduced and eventually eliminated altogether. Not because of politics--in fact as the process advances the public will no doubt be kicking and screaming every step of the way--but because our whole economy and the government spending that is currently propping it up is facing a dramatic and permanent contraction.

The implications are obviously horrific. Take away unsustainable federal deficit spending and our real economy would already have contracted about 10-20%. Given that the reality of Peak Oil means any significant “recovery” is impossible and that the economy over the next decade has nowhere to go but down, many of the unfortunate “99ers” along with many millions more yet to be laid off as the economy continues to collapse are likely never going to be gainfully employed again.

The truly insidious aspect of the lies being perpetrated by our “leaders” and our mainstream media in their insistance that the “recovery” has already begun is how such absurd propaganda prevents people from realizing what they really face while they may still have some financial resources available to prepare themselves. As it is many are doing counterproductive things like going back to college, placing themselves deeper in debt to take courses that will not help their job searches in an environment in which even freshly minted college graduates with high GPAs cannot find decent employment. These lies we collectively tell ourselves also allow for absurd proposals, like the cutting back of unemployment benefits at a time of desperate need, to be seriously considered.

So what is ultimately to become of the unemployed when their benefits run out? That is the great tragedy that will be unfolding all across America over the next few years even if we are lucky enough not to see economic collapse accelerate before then. I really wish there were possible solutions I could propose as to how we can reverse this slowly unfolding humanitarian crisis. Unfortunately, as long as we as a people remain collectively hypnotized by what the late Joe Bageant used to call the American Hologram of the mainstream media, no realistic solutions will ever receive any kind of public hearing, and the downward spiral for millions of former blue collar and middle class workers will continue unabated.
Posted by Bill Hicks at 6:35 AM