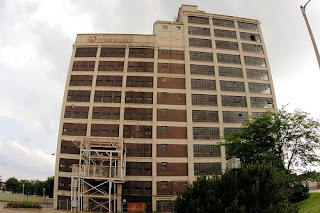 Not many people have the "honor" of having the city near where they grew up named as the “Worst City in America.” I am one of those unfortunate souls. In 1996, Money magazine ranked the mid-sized rust belt burg of Rockford, Illinois, dead last among 300 U.S. cities in terms of quality of life. Money’s reasoning was simple: “few jobs and not-great health care.” And this was at a time when the tech-boom was fueling one of the fastest periods of economic expansion in recent American history.

Obviously, Rockford wasn’t always the butt of such derision. In fact, back in 1949 Life magazine actually said, “It is as nearly typical as any city can be.” Okay, so maybe that doesn’t bring to mind a glorious land of milk and honey, but it sure sounds like a pleasant place to live rather than an absolute urban hellhole.

So what happened? Well, unfortunately for Rockford and surrounding environs more than half of its earnings back then came from manufacturing…well above the national average at the time. Sundstrand Corporation, Woodward Governor Company, Airbrush Manufacturing, Hanson Clock Company and Hess & Hopkins Leather Company were just some of the industrial concerns headquartered there. In 1965, a major Chrysler assembly plant also opened in nearby Belvedere. Rockford was a town where things were built, and for nearly a century it formed part of the vital backbone of the American economy and supported tens of thousands of good paying blue-collar jobs.

Starting in the 1970s, however, all of that began to change as American corporations started to export manufacturing jobs overseas in search of cheaper labor. The trend accelerated in the 1980s under Ronald Reagan, a politician who was revered as a near-deity in conservative Rockford despite the fact that he repeatedly knifed its working class labor base in the back. The final nail in the coffin then came under Bill Clinton, who despite being a Democrat and alleged union supporter pushed through “free” trade agreements like NAFTA, completing the process of globalization that was the demise of manufacturing cities like Rockford.

Rockford’s downfall from the kind of place where working men (and later working women) were proud to raise a family to a post-industrial wasteland was a bipartisan effort more than a quarter-century in the making. It all boiled down to the fact that there was more money to be made in destroying America’s manufacturing base than there was in preserving it. Some cites that have fallen victim to this vicious turn in the business cycle have tried to arrest their decline by transforming themselves into tourist Meccas. But a place like Rockford, situated as it is among the Illinois cornfields and possessing little of historical interest, hardly has that option. The only factor preventing a complete collapse in the local economy to date is that the eastern section of the city lies close enough to the ever-expanding Chicago suburbs to derive at least some economic benefit.

Like the scenes in Michael Moore’s stinging documentary, Roger and Me--about the similar decline of his own hometown of Flint, Michigan--where hapless local officials try to arrest the decline of their city with increasingly desperate economic development schemes, Rockford’s city leaders have tried their best to revitalize the town in recent years. Their lack of success can be measured by the fact that Forbes magazine just recently ranked Rockford as the 14th Most Miserable City in America, stating:


“Once known as the Screw Capital of the World because of the billions of screws and bolts made locally, Rockford has struggled with high crime as well as soaring unemployment, which is expected to average 16.9% this year.”

But hey, at least the locals can take comfort in the fact that so many other places have been hammered even harder the past few years that they aren’t dead last anymore.

With Peak Oil-induced economic collapse sure to accelerate in the coming years, economically distressed places like Rockford are going to decline even faster. It is as inevitable as the fact that all those abandoned factory buildings will never be reopened. Thus we will witness the downward spiral into economic oblivion of countless American communities that not too long ago people were actually proud to have called their hometowns.
Posted by Bill Hicks at 6:04 AM