The McDonald’s Hiring Spree—Why I’m NOT Lovin’ It 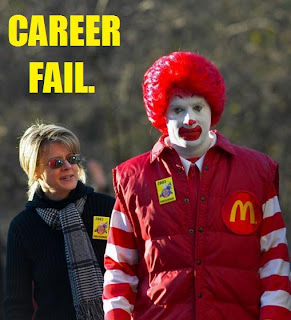 Last week one of the major economic headlines reported that McDonald’s corporation hired 62,000 burger flippers, cashiers and drive thru window attendants in just one day. Equally of note were the nearly one million additional applicants turned down for among the most menial, low wage and demeaning jobs our economy has to offer. It must be true what Josef Stalin once said that one death is a tragedy but a million are a statistic. That’s the only explanation I have for how almost a million Americans can get rejected for a job at McDonald’s with such minimal public commentary or any attempt to explain what it all means.

Maybe it’s because most of the upper middle class, in other words those whom our corporate owned mainstream media target with its "news" propaganda and most lucrative marketing campaigns, have never found themselves in a position of such desperation that spending the working day sweating over a grease fryer for minimum wage would mark an improvement in their personal fortunes. For them the operative phrase here is: does not compute.

But I’ve been there myself, sort of. I was attending high school in a small Illinois rust belt community back in 1979 when the second major Middle East war induced-oil shock hit America. The resulting deep economic recession cost Jimmy Carter his reelection bid and then lasted through the first couple of years of Saint Ronnie’s presidency. It was worst downturn of the postwar era up until that time, and it hit the manufacturing belt particularly hard. Fortunately, my father retained his middle management position at a local tire factory, so times were never truly desperate for my family like they were for many other blue collar workers who had lost out in the wake the first big round of globalization. Needless to say, it was a truly putrid economy for a teenager to be out there looking for his very first real job.

During the nadir of that recession it was announced that an old downtown hotel had been bought out by a national chain and was going to be completely refurbished and reopened. I gather the venture was not considered risky at the time because my town had only a few other lodging options in the days before cheapo chains like Super 8 and Motel 6 spread across the landscape. Anyway, this new business venture generated excitement not just for the glimmer of economic development it brought but for the 100 or so jobs to be created, even if most of them would only be paying minimum wage to start.

Working at a hotel seemed to this 16-year-old like it might be a pretty cool thing, so one morning my best friend and I schlepped down to the temporary office where they were taking applications. It was a typically blustry Midwestern winter day under a bleak gray sky, and when we arrived we were shocked to see that despite the chill in the air a long line was already backed up out the door and stretching around the block. We debated giving up and going home, but my buddy convinced me to stay until we could at least submit our applications. Most of the other people waiting in line were much older than us, and it didn’t dawn on me at the time that our very presence among them as a couple of high school kids merely looking to make some extra spending money probably didn’t lift their spirits any.

As it turned out, we had to wait about three hours just to be given an application to fill out, which we then handed to a lady wearing a grim expression like it had already been a very long day. She thanked us wearily and said we’d get a phone call if we were selected for a job interview. The next day the local newspaper reported that over 3000 people had applied for those jobs and had come from communities all over northwestern Illinois. Not surprisingly, neither my buddy nor I received a call, and I went back to delivering newspapers for the paltry sum of twenty bucks a week.

That was a long time ago, of course, and I’ve been fortunate during my adult working life that I’ve never been forced to wait in line with thousands of others just hoping to win the prize of long hours for a meager paycheck while perhaps my children are back home in a cold house hoping that maybe their daddy will get lucky this time. At least back then there was the somewhat comforting hope that the economy would eventually get better, and indeed it did finally "recover" despite the fact that many of the formerly high paying factory jobs never came back.

Today, however, in the wake of Peak Oil and the specter of increasing resource scarcity there is no realistic hope that the economy will ever again significantly improve for working people. Most of the nearly one million desperate souls who McDonalds turned down last week are stuck in their bleak circumstances, many no doubt relying on government support just to survive. So what happens on that day inthe not too distant future when our insolvent federal government finally becomes unable to provide them with that support?

That, my friends, is the truly scary question.
Posted by Bill Hicks at 6:46 AM