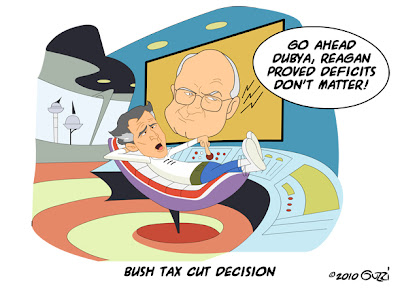 Back when President Bush was still in office, it was common on liberal and progressive websites to see derisive references to Dick Cheney’s infamous quote justifying the Bush tax cuts, “deficits don’t matter,” as a way of chastising Bush for his reckless fiscal policies—cutting taxes on the wealthy while engaging in two costly wars of choice. But a funny thing happened after January 20, 2009. A Democratic president took office, albeit during the worst economic downturn since the Great Depression, and now all the sudden many of those same liberal and progressive commentators are chastising the supposed deficit reducing zeal of the Republicans and even of President Obama himself.

This is, of course, in the wake of deficits that have more than tripled since Bush’s last full year in office and a total national debt that has soared to more than 100% of America’s GDP. Obama’s relatively mild deficit reduction proposal offered to the Republicans this past week sent off howls of protest in liberal and progressive circles, who have been citing opinion polls like the one I wrote about yesterday showing that the public overwhelmingly opposes deficit reduction if it means slashing government benefit programs. Thus we have the spectacle of Dick Cheney’s most implacable enemies now belatedly agreeing with him.

Regarding those public opinion polls, as far as reality is concerned it matters not one whit whether the majority of the public opposes deficit reduction any more than it matters whether they oppose the law of gravity. Despite their passionate opposition, they are still going to remain firmly attached to this tiny sphere as it goes hurling through the vastness of space. What this shows is that Dick Cheney was partially right—deficits DON’T matter, until they do. And now they do, which is the dynamic that no one in Washington is willing to face, so addicted have the denizens of the imperial capital become to simply borrowing what they need to pay for their grandiose visions of worldwide empire.

It was actually a hell of a run. For 30 years, starting with the 1980 election of Cheney’s hero, Ronald Reagan (the one for whom deficits didn't matter), America was able to have its cake (a globe-dominating military establishment) and eat it too (massive social programs) by mortgaging its future. Unfortunately, we have reached the point where the bill is coming due and something has to give. The only alternative is the rapid devaluation of the dollar, with food and energy prices skyrocketing far above the already elevated levels we have today. Additionally, when interest rates begin to rise as our creditworthiness sinks, our already-fragile, debt saturated economy will implode like a house of cards in the middle of a hurricane.

Another sad fact is that liberals and progressives who stridently oppose deficit reduction are also tacitly arguing in favor of the war policies they claim to abhor. The argument on the left SHOULD be: No cuts to domestic programs that help Americans citizens while we continue to spend trillions of dollars policing the globe. Deficit reduction should first and foremost fall upon the back of the Pentagon before we even BEGIN to talk about reducing entitlements.

Mainstream liberals and progressives shy away from making such arguments because that rhetorical line brings them far too close to the truth about the man in whom they placed all of their hopes and dreams back in 2008. It should be perfectly clear by now to any sentient being not wearing partisan blinders that when it comes to those issues of real importance—maintaining the big business, war and empire agenda of the nation’s corporate elite—Obama is no different from Bush. The confidence of his Wall Street benefactors is what will allow Mr. Hopey-Changey to raise a billion dollars in campaign cash for his reelection. Yet criticism of Obama for his war policies is off limits in most left wing circles, as evidenced by the fact that the antiwar movement, already anemic when Bush was in office, has virtually disappeared altogether.

So the debate is being framed by two sides, neither one of which understands the true predicament facing America. The liberals and progressives are digging in their heels on entitlement spending, while the conservatives are steadfastly against tax increases on those with the most ability to pay. Trying to negotiate the middle ground between the two is Obama, but even if his original deficit reduction proposal that had the liberals and progressives so up in arms were to somehow pass unaltered, it would STILL leave the federal government spending a trillion dollars more than it takes in from taxes every year.

In the first half of this post, I asserted that the outcome of the debt limit fight is going to be very interesting to watch as what it really represents is the first time the country has been faced with making hard choices and can no longer “kick the can down the road” with the bill being paid by future generations. The clock is ticking and there is about to be huge amounts of metaphorical blood spilled on the floors of the House and Senate as sacred cows, including Social Security, likely get gored in the name of deficit reduction. But it won’t be nearly enough, and I’ll be surprised if it even staves off the resumption of the debt crisis until after the November 2012 election.

Author James Kunstler predicted that as what he referred to as The Long Emergency unfolded, resource wars would break out all around the world. Welcome to the first round of America’s very own domestic resource wars.
Posted by Bill Hicks at 6:47 AM