Memo to Bill Maher: You Should Be MORE Than Just “Disappointed” With Obama 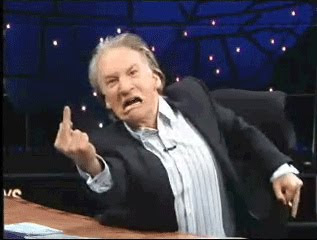 As reported by The Raw Story yesterday:

“I don’t know what is going on in this man’s mind,” he continued. “I like Obama so much, I’m always trying to understand what he is dealing with, and I understand he’s got a lot to deal with. Washington is very tough and the Republicans are certainly assholes — oh, sorry, wrong network for that — but I just don’t get this giving away the store. I mean, I never thought he would be caving on the revenue side of it.”

I like Bill Maher. He is one of the few comedians able to do political humor well. Never afraid to tell it as he sees it, he was fired from his original gig on ABC’s Politically Incorrect for making an important but very unpopular point about the 9/11 hijackers in the wake of the seminal event that changed the course of recent American history.

Maher was particularly on top of his game during the Bush years. On his HBO show, and even more so on his stand up comedy specials for that same network, Maher expertly skewered Bush and his minions with sharp wit and cutting language. A quote from one of his shows that always stood out for me: “I’m pissed off that more people aren’t pissed off,” which is exactly how I felt for most of those grueling eight years.

Unfortunately, as shown in the Raw Story quote, since Obama’s election Maher has lost his edge. He’s still great at throwing incendiary verbal bombs at the Republicans, but he, like many American mainstream progressives, has a very hard time accepting the fact that Obama is no better than his immediate predecessor. Whenever I hear quotes like “I understand what (Obama) is dealing with, Washington is very tough,” I want to shout back at the teevee, “Screw that, Bill, you should STILL be pissed off that more people aren’t pissed off.”

Despite all of the evidence to the contrary, many American progressives won’t admit that they were hoodwinked in 2008 even though Obama clearly telegraphed his intentions before Election Day even rolled around. First he chose the utterly despicable Joe Biden as his running mate, the same man who spent 34 years in the Senate as a bought-and-paid for shill of the credit card companies. After using his pathetically weak reputation for being against the Iraq War to help him defeat Hillary Clinton in the Democratic primaries, he then turned around during the general election and signaled his intention to ramp up the equally futile war in Afghanistan. In September of that year, moreover, Obama was a leading Senate cheerleader who helped ram the hideous TARP law down the country’s throat despite overwhelming public opposition.

Since Inauguration Day it has been one sellout of the left after another. Afghanistan, Libya, a national health care plan that was just another corporate giveaway, no closing of Guantanamo or reining in of the out-of-control national security state, airport scanners, drone missiles, no prosecutions for torture, no investigations of Wall Street and the big banks that crashed the economy, weaseling out on climate change legislation, continuing the costly and futile War on Drugs—the list of Obama’s betrayals of progressive causes just goes on and on. For Bill Maher to finally come out and merely say he is “disappointed” with Obama actually makes me quite disappointed with him.

Some progressives, however, are finally starting to wake up and smell the coffee. William Rivers Pitt, the editor of the website Truthout, wrote a blistering slam of Obama’s handling of the debt ceiling negotiations on Tuesday called, “This is Despair.” Here’s a quote:


I see a president on his knees, hands outstretched, offering the best ideas and policies liberal governance has ever devised up to the voracious carnivore of GOP opportunism. I see the end of the New Deal, and a far crueler America emerging from the aftermath. I see a Democratic president voiding his bladder on all that he is supposed to uphold.

Mr. Obama got on those knees again Monday night, on national television no less, and once again begged the GOP to devour Social Security and Medicare. He gobbled up the flawed, flayed premise of the far-right's deranged argument, again, and pleaded for the chance to give away the core of what he was elected to defend.

I thought I was done being ashamed of my president.

So, after being repeatedly beaten over the head by their alleged savior, some liberals and progressives are finally starting to “get it.” Now maybe I won’t feel so lonely when, as a former member of that tribe, I criticize Obama’s awful record since taking office.

Ultimately, however, it won’t matter in the slightest. It’s not as if there is a truly progressive candidate the disaffected can rally around who would have any chance of stopping the Wall Street-funded Obama reelection juggernaut. Additionally, it’s not like there is any chance that meaningful change can still be enacted through the electoral process. All remaining hope of that should have been thoroughly extinguished after 2008.

Whatever the outcome of this debt ceiling debacle, Obama is going to win renomination by the thoroughly corrupted Democratic Party. He’ll then face off in the general election against whatever zealous cretin the GOP finally chooses to oppose him. The election will occur in an extremely tense political climate in which the economy will likely be cratering again. Tens of millions of angry voters will head to the polls desperately demanding change…only to find that the system has become totally rigged and the change they seek is nowhere to be found.
Posted by Bill Hicks at 6:48 AM