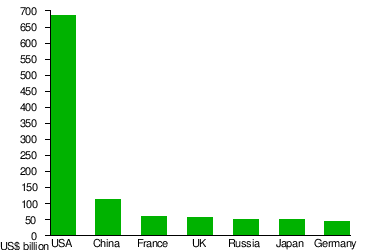 I know that many of my readers share my belief that the first cuts in America’s out-of-control deficit spending ought to come out of the Pentagon’s budget before any social programs are touched. Direct and indirect military spending adds up to more than one-fourth of the total federal budget. America spends as much on its military, in fact, as nearly every other country in the world combined.

Think for a minute about how insane that is. There is no country or combination of countries in the world that are a realistic threat to the United States. The United States Military does not “defend” America. Instead, it maintains over 700 military bases around the world, policing the globe to make it safe for American international conglomerates to make a buck, and also, not incidentally, to enrich the very defense contractors many of the top brass go to work for after they retire.

According to Wikipedia, America’s direct military spending in 2010 was $687 billion. That means we could slash such outlays by 75%, to $171 billion, and still be way ahead of the world’s number two nation, China ($114 billion). Doing so would require ending the pointless occupations of Iraq and Afghanistan as well as the ongoing aerial attacks in Libya, Yemen and Pakistan. It would require closing our overseas bases and bringing all the troops back home. But guess what? If we did all of that, we would still be completely immune from conventional military attack.

But that is not the way the military sees it. Just yesterday, I found this little piece of Pentagon advocacy masquerading as legitimate journalism in the Examiner.com:


According General Martin Dempsey, President Obama’s nominee to be the next Chairman of the Joint Chiefs of Staff, it would be "extraordinarily difficult and very high risk" to cut $800 billion from defense spending as is proposed by President Barack Obama and Senate Majority Leader Harry Reid as part of efforts to reduce the national debt.

General Dempsey accurately points out that "national security didn't cause the debt crisis nor will it solve it.” Despite this fact, Senate Democrats and the President continue to insist on cutting defense to pay for deficit reduction anywhere from $400 billion to over $800 billion.

While many local political leaders -- governors, mayors, county executives and their staffs -- believe it's better to reduce the bloated military budget than cutting social programs, they forget the axiom, "We must fight them over there, so we don't have to fight them over here.”

Wow—let’s take those three awful paragraphs one by one. First, we must remember that the $800 billion Obama and Reid proposed cutting was spread out over ten years, meaning that it represents only $80 billion per year. That would eliminate exactly 11.6% of the direct military budget. Given how much money the Pentagon wastes every year on unnecessary weapons systems, for example, that would hardly represent a “very high risk” to anything, except maybe for some defense contractors’ bank balances.

Let’s next examine General Dempsey’s quote in the second paragraph, "national security didn't cause the debt crisis nor will it solve it.” National security may not have caused the crisis, but out-of-control national security spending more than played its part. Anyone remember the so-called “peace dividend” that was supposed to come after the end of the Cold War, allowing the United States to spend more on butter and less on guns? Whatever happened to that, anyway?

But it’s the third paragraph and the quote from the author of the article that really makes my head hurt: "We must fight them over there, so we don't have to fight them over here.” Who exactly are we going to have to fight over here? The Chinese barely even have a navy, let alone an invasion fleet. Check the other countries on the chart at the top of this page depicting the world’s largest defense budgets. France, the UK, Japan and Germany are all currently American allies, and the only threat Russia poses to America is with its aging nuclear arsenal—something which hardly justifies spending approximately $2000 for every man, woman, and child in the United States EVERY SINGLE YEAR.

I’ll actually flip General Dempsey’s argument back around on him. Right now the debt crisis is in fact the biggest national security threat currently facing America. Massive cuts being made in social spending to maintain the military will result in widespread civil unrest and violence here at home. Continuing to deficit spend as we have to avoid cuts in both social spending and the military will result in a rapid devaluation of the dollar and skyrocketing oil and food prices. This will exacerbate the pressure those factors are already placing on autocratic Middle Eastern regimes such as Saudi Arabia. Should Saudi Arabia fall, world oil prices would skyrocket past $200 a barrel, domestic gas prices would quickly shoot towards $10 a gallon and America’s consumer economy would quickly collapse, making it unable to continue to support a massive military-industrial complex.

So, General Dempsey, it’s like the saying on the old car repair commercial, “you can pay me now or you can pay me later.” You can accept Obama and Reid’s relatively minor cuts now, or you and your Pentagon buddies can face the collapse of everything you hold dear in relatively short order. Collapse is, of course, inevitable anyway. But all you are doing by being so obdurate is hastening the date of your own inevitable and well-deserved demise.
Posted by Bill Hicks at 8:02 AM