Friday Rant: America’s Plutocrats are No Different than the Leaders Who Ran the Soviet Union into the Ground 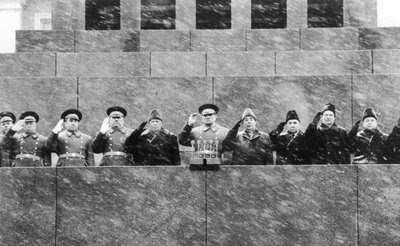 Author Dmitri Orlov has developed quite a following with his book, Reinventing Collapse, in which he compares the fate of the United States to that of the Soviet Union. Orlov sees many similarities between the world’s sole remaining superpower and the one that collapsed 20 years ago, and thinks that we are well into our “Gorbachev period.” As it so happens, I agree with him, though I only wish we had a “leader” half as humane as the last Soviet premier ultimately turned out to be. When push came to shove, not only did Gorbachev end his own nation's mindless war in Afghanistan, but he refused to use the awesome military might of the Soviet empire to try and hold things together. For that, he deserves history’s thanks.

Over here on the other side of the globe, the twilight years of the American Empire have seen our political system become every bit as sclerotic and undemocratic as that of Soviet Communist Party.

Boy—talk about a statement guaranteed to blow a gasket in the mind of your average Rotarian or American Legionnaire.

America STANDS for freedom, Bill. Many thousands of our brave young soldiers have fought and died for it. How can you possibly SAY such a thing?

Just calm down for a moment and hear me out. Are we all in agreement that the Communist Party had a monopoly on power and Soviet elections were a complete sham in which the outcome was guaranteed ahead of time? Okay, then ponder for a moment the results of the last U.S. presidential election and the major moves that President Obama has made since taking office, contrasting them with the likely actions of his defeated opponent had he won.

Considering the publicly stated viewpoints of Senator John McCain, would he have acted any differently on the Afghanistan surge? Would he have declined to participate in the Libyan bombing campaign? Would he have not enacted some kind of stimulus program early in his tenure to stave off the financial crisis given that President Bush pushed through a stimulus bill during his first year in office? Would he have closed Guantanamo and put an end to the excesses of the national security state? Would he have opposed the bailouts of Wall Street and the big banks even though he voted for them in the Senate?

The answer to all of those questions is, of course not.

The only possible difference is that McCain MIGHT not have pushed through some version of Obamacare, but even that is questionable given that the structure of Obama’s health care program is a corporate giveaway similar to Bush’s prescription drug program. On every single issue of importance there is no substantive difference between what President Obama has done and what President McCain would have done had he been elected instead.

But, but, but...what about gay marriage, or abortion or the Pledge of Allegiance? Certainly McCain differs from Obama on those issues.

So what if he does? Do you really think any of those issues matter one whit to the likes of Goldman Sachs Chairman Lloyd Blankfein? Blankfein doesn’t give a damn if two lesbians can say their sacred vows, or whether that scared teenager has access to a family planning clinic or whether kids unfortunate enough to have to attend the shitty New York City school system say “under God” while holding their hands over their hearts in the morning. After all, his kids go to elite private schools and if his daughter should happen to get in trouble he can send her to some first class, discreet facility to get her fixed right up— no muss, no fuss.

Social issues are merely a distraction to keep the plebes fighting with one another so they won’t notice that the likes of Lloyd Blankfein are stealing their country right out from under them. The dynamic usually works something like this. Step 1: Some wingnut commentator says something outrageous, or some far right Republican Congressman introduces an outlandish piece of legislation that has no chance of ever passing. Step 2: Mainstream liberals and progressives get themselves all in a huff about it—maybe Jon Stewart lampoons the originator on The Daily Show or Keith Olbermann does a Special Comment about it. Step 3: The overwrought liberal and progressive reaction causes an equal and opposite supportive reaction on Fox News and right wing talk radio. Step 4: Both sides send out fundraising letters citing the issue and imploring their supporters not to let the other side “win.” Step 5: Rinse and repeat.

Meanwhile, Blankfein and his Wall Street buddies quietly keep writing huge campaign checks to candidates of both parties so that none of them will oppose their agenda, which is continued government support for big business, war and empire. Republican or Democrat, it doesn’t matter whom you choose. The result is the same either way. Given his deplorable record and how many times he has thumbed his nose at his own base, how do you think Obama is going appeal to liberals and progressives this time around? By scaring them with the specter of President Palin or President Bachmann, of course. It’s all he has got left going for him at this point.

That’s the way it is in the American political system these days. If you don’t play ball with the big money boys, you’ll never be able to position yourself to stand a chance at being elected to national office, and the corporate owned and thoroughly corrupted mainstream media will never take your candidacy seriously. Just ask Ralph Nader or Dennis Kucinich.

In essence, this system of vetting candidates works very similarly to how the old Communist Party apparatchiks used to do it. Perhaps it’s even worse than that, given that the last guy the Soviets picked at least TRIED to reform the system before it all fell apart on him. You can accurately call Obama a lot of things, but reformer is not among them.

There is a chance that 2012 may be the last time that even the façade of representative democracy is maintained during a presidential election year. My bet is that five more years of slow grinding, peak oil-induced economic collapse will snuff out even the remaining pretense by 2016, and some kind of authoritarian regime will be established shortly thereafter. It’s the only way the corporate elites can possibly hope to maintain any kind of order as the reality of our teetering on the brink of the economic abyss finally becomes undeniable. For even your average Jersey Shore watching, stupefied zombie will probably begin to notice that something’s amiss when he or she can no longer afford to pay the monthly cable bill, nor put gasoline into the F-150.
Posted by Bill Hicks at 6:46 AM