Batten Down the Hatches, an Economic Hurricane is Brewing 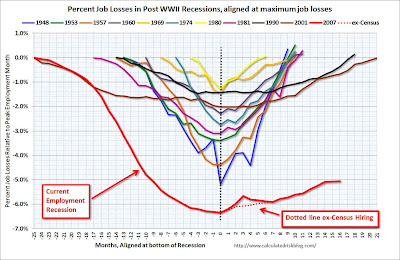 Reality returned with a vengeance on Friday as the June Monthly Jobs Report was issued by the Bureau of Labor Statistics (BLS). The report showed that only 18,000 jobs were added to an economy that needs to add around 150,000 jobs per month just to keep pace with population growth. Making matters worse, the reports from the previous two months were downgraded by a total of 44,000, thus removing more jobs than were reported to have been gained in June. Additionally, 131,000 unverifiable jobs were added by the BLS’s “Birth Death Model,” meaning that in reality the nation most likely lost jobs in June, though because of the way the formula works you cannot just subtract the Birth Death Model number from the total to get an accurate count.

Plenty of other financial pundits have been covering this story exhaustively since these disastrous numbers were released yesterday, so rather than add more windy cyberspace verbiage to their attempts to explain what they mean, I will instead say that Joe and Leslie, the two unemployed folks that I’ve recently written about on this blog, could have clued in anyone who was surprised by this bad report well before it was released. Both are eager and willing to work at any job that will pay them a living wage, and each has spent months fruitlessly searching for such a job.

Looking at the chart above (courtesy of Calculated Risk), dramatically shows just how bad the employment situation is now in America. As you can see, this is the deepest jobs downturn since World War Two and in just a few more months it will become the longest as well. The reckless fiscal policies of the Bush and Obama administrations in borrowing over $4 trillion since the 2008 market crash temporarily arrested the sharp drop in the economy and jobs market, but all it took for the decline to resume was oil and gasoline prices shooting back up for a few months to where they’d been during the summer before the crash. Nothing was structurally fixed by the insanely expensive bailouts and stimulus package—except to transfer huge amounts of money from the taxpayers to the corporate elites and Wall Street.

We are now rapidly reaching the point where the next major peak oil-induced economic shock wave is about to hit. So many negative factors are lining up it is difficult to keep track of them all, but leading the list are the continued financial crises in numerous European countries; the likelihood that the upcoming debt limit agreement in Washington is going to remove hundreds of billions of dollars in government spending from the economy (Obama’s proposal this past week would shave roughly 2.8% from the total GDP); and, lastly and most importantly, a real oil supply crunch is now shaping up around the world. The recently announced release from the Western nations’ Strategic Petroleum Reserves is an indicator of an imminent crisis in the oil markets, as is Goldman Sachs’ announcement on Friday that it believes swing producer Saudi Arabia has reached peak oil production and can no longer flood the world with additional supply to keep prices down.

Add this all up and the dreaded “double dip” recession is not only a virtual certainty, but the second dip is likely to make the first one look like a walk in the park. In America it comes just in time to have a hugely destabilizing effect on the next presidential election. If this economic shock wave is as bad as I fear it might be, President Obama will be resoundingly defeated next year, which he richly deserves for his complete mishandling of the economy since taking office. It is only when you look at who from the other side might be his likely replacement that you realize it is time to be very afraid. Batten down the hatches, everybody. The outer bands of a Category 5 economic and political hurricane are now approaching.
Posted by Bill Hicks at 7:37 AM