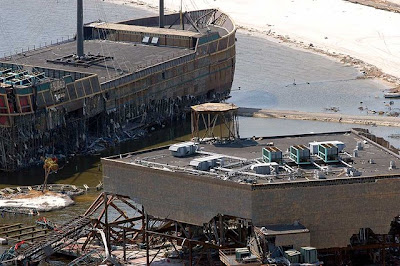 As a lifelong history buff and someone who became Peak Oil Aware several years ago, I find it interesting to reexamine the past 40 years of American history since America’s domestic oil production peaked in 1970 through that lens. Some aspects of that momentous event are clearly obvious—for instance we have since become totally dependent upon oil imports to keep our economy running. Other changes in our society are much subtler—such as the fact that the average working person’s wages when adjusted for inflation have been virtually stagnant since the Nixon administration.

Not coincidentally, I would argue, gambling has in recent years shaken off its Mafia-dominated roots and has ridden a wave of legalization to spread far and wide across the landscape. In 1970, there was only one place in America where you could go a wager your paycheck without the risk of being arrested, and that place was Las Vegas. And it wasn’t the sanitized, Disneyfied Las Vegas of today either. The casinos were grungier, and effectively run by the Kansas City mob. If you failed to make good on your losses, you’d likely get a visit from a couple of hired goons who had a price list of what body part they would break depending on how much you owed.

Beyond southern Nevada, there were a handful of state lotteries, the first one having been established by the state of New Hampshire a mere six years earlier. Gambling was frowned upon by religious institutions who fought vigorously the keep the wages of sin away from local communities.

This all began to change during the first era of economic stagnation in the 1970s. Three years after the first round of gas lines hit the country in 1973, Atlantic City became the second location in America to legalize “gaming” as it came to be known, and began building its own casinos as fast as it could. The rundown New Jersey beach resort would become the first of many locales to try to use Americans’ insatiable desire to get something for nothing as a basis to finance urban renewal. Though controversial at the time, this pattern would become so pronounced going forward as to become routine today.

Meanwhile, enticed by the idea of easy revenues, state legislatures everywhere fell all over themselves to pass their own lottery bills. In order to get the public to swallow the bitter pill of legalizing “sin,” proceeds from the lotteries were supposedly committed to help fund education or other popular programs. In reality, lottery proceeds instead merely replaced appropriated funds so the money could be used elsewhere. Actual levels of spending on education usually did not change.

My favorite hypocritical trick was the communities that built “offshore” casinos to assuage voters who were still uptight about gambling. For this reason, riverboat casinos sprung up everywhere along the banks of the Mississippi River in the traditionally conservative Midwest. Down south, the state of Mississippi similarly built its Biloxi casinos out in the Gulf of Mexico. The folly of the latter ludicrous idea was seen when Hurricane Katrina ripped the unfortunately placed buildings apart as it slammed ashore in 2005.

Today, there are so many casinos dotting the landscape that they are draining the revenues from America’s original Sin City in Las Vegas. Forty-three states and the District of Columbia now have lotteries. Whatever moral qualms there used to be about gambling have been buried under a mountain of easy revenue for state governments. Vinny the Nose and his crew would have been proud and probably a little dismayed to know that they used to risk serious jail time for providing this exact same service.

Of course, as with many other aspects of modern America, we are now facing Peak Gambling. Las Vegas has been particularly hard hit from declining revenues, as evidenced by the city having one of the most dramatic housing bubble collapses in the country. Empty subdivisions, condo towers and commercial developments have become an all too common feature around the famous Strip. Elsewhere, lottery revenues are no longer sufficient to save insolvent state governments from fiscal disaster.

The tale of the rise and now imminent fall of legalized gambling in America is just another sad example of the ending of the American Dream. Gambling always was a sucker bet, often strip-mining assets from those who could least afford it. Vinny and his buddies knew that, which is why they always kept the brass knuckles handy. The problem for those that pushed so hard to bring it to every corner of the United States during the past four decades is that the “suckers” are rapidly becoming tapped out. You can’t get blood from a stone, as the old saying goes. And now it is the entire U.S. economy that is rapidly turning to stone.
Posted by Bill Hicks at 6:45 AM