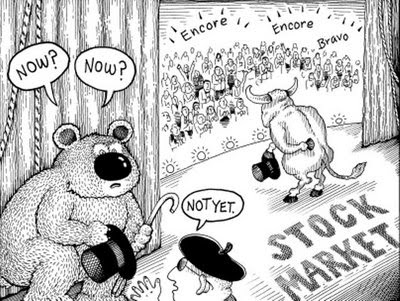 If you spend a lot of time watching our corporate owned and thoroughly corrupted mainstream media, you might have the rather ridiculous idea that the American economy is in the midst of a recovery from the recession that accompanied the 2008 financial crash. Sure, there might have been some bumps along the way, but expansion has resumed as evidenced by two years of positive GDP growth and the fact that jobs are being created again. It’s just a matter of time now before all of the unemployed folks are back to work and home values resume soaring to the stratosphere.

Sadly, far too many people still believe all that nonsense. They have failed to notice that the only thing propping up the so-called “recovery” is an insane amount of U.S. Government deficit spending ($1.5 trillion annually out of $14 trillion dollars in total economic output), without which the GDP numbers would be an astonishing 10.7% lower than they have been the past three years. There’s no other way to spin those figures—three straight years of double digit economic contraction are Great Depression numbers. That’s why for tens of millions of people it doesn’t FEEL like the economy has recovered, whatever the news might say. If you got laid off in 2008 or early 2009 and weren’t lucky enough to get a stimulus program-funded government contract, you were likely left to become a “99’er” whose unemployment benefits are now running out.

So why aren’t more people up in arms? Why are there not massive demonstrations on the Washington Mall and elsewhere? Why have we not seen Greek-style rioting here in America? So far, such activity has been limited to some campus unrest out in California; a few weeks of union-backed demonstrations in Wisconsin that accomplished exactly nothing except for some relatively meaningless local recall elections; and the faux-outrage of the billionaire funded and utterly compromised tea party movement. As far as genuine anger out in the streets goes, Americans have been as docile and accepting as a newborn lamb.

The answer should be pretty obvious. What the late author Joe Bageant called the American Hologram has been working overtime on behalf of its corporate masters, spewing forth happy-talk financial propaganda when not serving up celebrity-spectacle distractions and vapid reality shows to keep its viewers fat, and if not happy, at least not in a rightly justifiable rage.

Conversely, if you really want to understand what’s happening with the American economy, you actually have to READ, something which many Americans find as abhorrent as having to take the stairs instead of using the escalator. Some print sources have done a reasonable job of covering different aspects of the ongoing economic malaise, and there are many places on the Internet where the truth is presented without the cheerleading spin. But as far as the vast majority is concerned, those reports might as well be buried under that flag Neil Armstrong planted in the Sea of Tranquility back in 1969.

There is perhaps no more observable example of the Hologram in action than the relentless touting of the stock market indices, the Dow Jones Industrial Average (DJIA) in particular. Every cable “news” channel features a stock ticker that provides updates in real time all day long. The evening news shows, despite only having about 21 minutes per half hour broadcast to sum up the day’s events, always makes sure the stock results get highlighted—even on that bane of right wing conservatives everywhere, National Public Radio. It’s been this way for so long that no one ever questions why that should be.

Why promote the DJIA so relentlessly when it’s the upper 10% of households that own a majority of stocks while the lower half of wage earners own virtually no stocks at all? The networks insist on persistently pumping a figure of little meaning to a vast majority of the population. What’s more, most of those who do have large stock portfolios presumably get their financial information from sources far more sophisticated than the nightly news. And if they don’t, they shouldn’t be investing in stocks in the first place.

The only answer I can come up with is that the DJIA is being used a propaganda device to help sell the narrative that all is fine with the economy. Since the depths of the market crash in March 2009, the DJIA has regained nearly all of its pre-crash losses.

Yes, stocks are way up. Whoo-hoo, happy days are here again. Pop the cork on the champagne, honey, tonight we are going to celebrate.

Don’t pay any attention to the fact that the rally was bought and paid for by the Federal Reserve’s Zero Interest Rate Policy and Quantitative Easing programs; the federal government’s $700 billion bailout of the big banks and Wall Street; and an additional trillion dollars of annual deficit spending being added over and above the already high deficit levels of President Bush’s last full year in office. Also ignore the fact that even with the recent run-up, stocks are not much above where they were in 2000, meaning you could have kept your money under your mattress for the last 11 years and been just as well off—not to mention that you probably would have slept better during the market’s many wild gyrations.

The very purpose of all the reckless post-crash economic policies was primarily to pump up the stock markets. In the minds of our economic overlords, it was imperative that at least the facade of prosperity be propped back up in order to quickly dissipate the doom and gloom mentality that accompanied the financial crash. Consumer spending represents approximately 70% of the American economy, so they had to get the plebes to open their wallets and pull out the plastic again. Coaxing folks back into the shopping malls required getting them to stop worrying about the future and to resume partying like there’s no tomorrow.

There was nothing else that could be touted which would achieve the same effect. The GDP numbers swinging back over to the positive in the summer of 2009 wasn’t going to do it, as far too many people don’t really comprehend what that abstract concept really means. Besides, GDP is only reported once a quarter—and thus is not very useful for the daily drum beat. The unemployment numbers continued to relentlessly suck despite the upward bias in the government’s calculations, so there was no help there. And they certainly couldn’t hype a real and non-manipulated indicator like the number of Americans on food stamps, because that one was literally exploding in the wrong direction.

No, they had to focus on the rebound in stocks, which was a win-win since it fit into what their agenda was anyway—making good the losses experienced by the same group of predatory capitalists who caused the market crash in the first place with their reckless financial bets. This is why I have stopped paying attention to the stock market and the DJIA altogether. The last time it had any value as a true economic indicator was in late 2008 and early 2009, before all the massive manipulations began to take effect. In addition to what I’ve written above, how can you trust any institution where on average an asset is held for mere seconds before being transferred from one supercomputer's data bank to another?

At some point, those doing the manipulating will run out of ammunition and there will be another crash. They will then no doubt argue for more bailouts, more stimulus and more quantitative easing to get this whole cycle going all over again. We’re now so far in the hole, that trying to keep the game going a little longer is all they have left. The problem is, by that time the dying economy may have finally reached the point where all attempts at emergency resuscitation prove ultimately futile.
Posted by Bill Hicks at 6:48 AM