Innocent Woman Nearly Murdered Because She Looks Like Casey Anthony 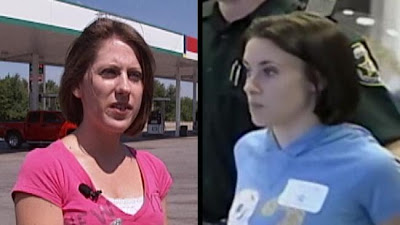 Editor's note - since I first posted this story, it has been reported that the initial account was erroneous. Just goes to show, you can't trust the mainstream media at all.

Last Sunday, I wrote a post called “The Hologram Lynches Casey Anthony” deploring the media’s conduct in whipping up mass anger and hysteria at one ordinary criminal defendant, thereby creating conditions in which it would be dangerous for her to walk the streets despite her acquittal on murder charges by a jury of her peers. I likened it to the very real lynchings that have plagued much of American history, and asserted that the public’s out-of-control reaction should make any thinking person’s blood run cold. Since then, there have been reports that Anthony’s lawyers and even her unfortunate parents have been receiving death threats from crazed morons whipped into a frenzy by the coverage of the case.

Then, just yesterday there was this report from a television station out in Oklahoma:


Blackwell drove a few miles and says Nalley suddenly rammed her van into the back of Blackwell's truck.

She then pulled into a parking lot to get away.

"She hit me again, causing my vehicle to flip two and a half times, landing on the driver's side, and I just laid there playing dead," she said.

"I got to her, she was crying, she was shaking, she says, 'Mama, this lady thinks I'm Casey Anthony and she tried to kill me," her mother said.

Police chased Nalley for a while and finally arrested her for assault and battery with a deadly weapon. Nalley told police she was "trying to save the children."

How fucking scary is that? The readiness of this deranged woman to murder a complete stranger without even verifying her identity is absolutely frightening. You would think that such a story would cause the mainstream media recognize how dangerous it is to engage in such irresponsible sensationalism, especially at a time of severe economic distress when many people are already on edge. But of course they won’t.

The trial drew the eyeballs of millions who apparently have nothing else to fill up the empty void in their lives. Consequently, the 24/7 cable “news” channels were able to fill up countless hours of programming time endlessly discussing every aspect of the case and turning Casey Anthony into someone more real for their viewers than the people they encounter in their daily lives. Nancy Grace may have actually had an on air orgasm or two in her extreme lust for fame and attention.

I said in my original post that everyone who spent their time obsessing over Casey Anthony’s fate ought to be ashamed of themselves. I am now doubling down on that assertion.

The economic collapse we are collectively facing is gravely serious. Going forward the threat of crime committed by the economically distressed is going to increase exponentially. We don’t need the media fanning the flames and turning ordinary people into targets of mass vengeance.
Posted by Bill Hicks at 8:02 AM