Friday Rant: Why Do So Many Americans Put Their Faith in Prayer but Not in Science? 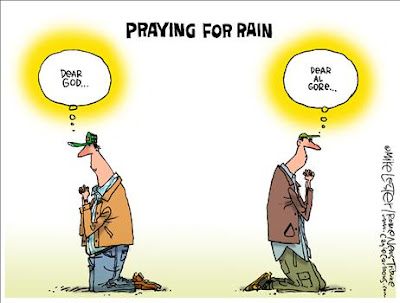 I’ve become a Weather Channel junkie lately. Not so much the teevee version, which has become contaminated with the same devotion to slickness and celebrity as have all other no longer watchable American media outlets, from CNN to ESPN to the History Channel. The MTV-ification of mainstream television, with its minuscule attention span, worship of consumerism and fast cutting images (seriously, if you are someone who still watches television, try counting the number of times the camera angle changes in a minute’s time on almost any show. I’ll bet 15-20 is the average these days) was completed in the decade after 9/11. TWC was one of the last networks I stopped watching altogether, right about the time they announced they were hiring the utterly vacuous celebritard Al Roker as on-air “talent.”

No, what’s riveted my attention lately is the Weather Channel’s website as a series of natural disasters, from floods, to fires to epic tornadoes, have spread across the landscape. Hardly a day has passed since March when somebody, somewhere hasn’t been getting their butts kicked by Mother Nature. From Joplin, to Tuscaloosa, to Cairo, to Minot to New Mexico, it has been quite an unfolding spectacle.

As with any mainstream media website it is almost as fascinating to peruse the reader’s comments as it is to read the articles, as they truly give one insight into the infantile mindset of so many of our fellow citizens. People these days have no hesitation about sharing their ignorant opinions in a medium where they can be read by anyone. What’s worse, we must remember, the ones doing the commenting are likely a bit better educated and more affluent than the average person if they have the means and know how to access a computer. It would be really funny if it wasn’t so damn depressing.

Every website has its own unique brand of lunkhead commenter. On the sports sites it's the morons who have divided up into rabid tribes on the basis of their worship of one group of overpaid millionaire athletes versus all of the others. Economic sites seem to be dominated by Cro-magnon, selfish Randians and teabagger types who would prefer if any “parasite” other than themselves receiving government largess wither and die already. And probably worst are the news sites, where you can always count on some boob to go on and on about Obama’s birth certificate, or his being a socialist, or a Nazi, or a communist, or any dumb thing other than the very legitimate criticisms that could be levelled at his actual policies.

Being devoted to a relatively uncontroversial subject like the weather, you’d think the Weather Channel would be immune from such idiocy. Well, you’d be wrong about that. Just last Friday, in fact, there was a routine story about some powerful thunderstorms that swept through Chicago. Here was the very first comment left on The Weather Channel’s website: “Maybe we should start allowing God back into our country.” Two hours after it was posted it had already drawn 45 “Likes.” And from what I’ve seen in my regular reading of the site, this is pretty typical. Disaster happens and the Weather Channel commenters start falling all over themselves to send out their prayers and make other comments like the one above.

Before anyone gets upset with me for being a religious hater, I’ll state right up front that I have no automatic quarrel with religious people. Joe, my best friend from high school who I’ve written about, is a born-again Christian, and he’s one of the most decent people I know. Some people use religion as a personal force for good to help them cope with life’s madness and I have no problem with that. Sometimes I envy them, in fact. If the Weather Channel commenters want to send their prayers to total strangers in cyberspace, that’s really their business.

The problem is that whenever a comment then gets posted about Climate Change, it will immediately be followed by a bunch of denialist nonsense, often by those very same religious commenters. Pray for the tornado victims, is the mantra, but don’t EVER consider changing the habits that may have helped create the conditions that made the tornado more powerful. That's GOD'S will.

If it were the Fox News website, you might expect this type of stuff. Devotees of Rupert Murdoch’s propaganda machine often loudly proclaim their religious beliefs while denying science and promoting the corporatist party line. But this is the freaking WEATHER CHANNEL, for fuck’s sake. If its programming were any blander and less threatening, they’d have to change the name to The Tapioca Channel.

Sadly, this is just another example how impossible it would be to try to turn things around in this country. As long as people have no shame about loudly proclaiming lack of belief in science as if science and religion have equal merit in explaining phenomena the physical world, and as long as our craven politicians are willing to pander to them in order to win their votes, we are are going to continue to speed towards the abyss at 120 MPH.

The real Bill Hicks, after hearing a fundamentalist Christian assert that God had put dinosaur fossils on the Earth “to test our faith,” replied: “I think God put YOU here to test MY faith, dude.” As usual, Bill captured exactly how I feel better than I ever could.
Posted by Bill Hicks at 6:23 AM