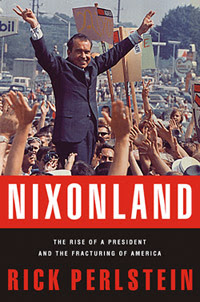 Not long ago, I finished reading author Rick Perlstein’s excellent biographical work, Nixonland, which is essentially a social and political history of the United States from 1964-1972. To me, this period is THE pivotal moment in recent American history. Not only did it see the coming of age of our largest and most influential generation, but it also marked the culmination of the progress that America liberalism made in reshaping the nation beginning with the election of Franklin Delano Roosevelt in 1932. Not incidentally, it was also the moment when America’s domestic oil production peaked and began a slow decline that has closely mirrored that of the country as a whole.

Perlstein’s account shows how the seemingly disgraced former Vice President dusted himself off after his narrow 1960 campaign defeat by John F. Kennedy and his subsequent loss in the 1962 California governor’s race to ride a wave of public reaction and resentment to the White House in 1968. It’s a fascinating and ultimately depressing story. Nixon was perhaps the shrewdest politician to occupy the Oval Office during the post-World War Two period. He was also the first one willing to do ANYTHING, however damaging to the country, to get elected.

During the run-up to the 1968 election, Nixon figured out that exploiting the growing backlash against the antiwar and civil rights movements was the key to victory. Never mind that these movements had history on their side and held the moral high ground. When it came to doing the right thing versus exploiting the fear and loathing of the electorate, Nixon invariably chose the latter throughout his long political career. Once in office, he cynically prolonged and expanded the scope of the Vietnam War for political advantage after making vague promises during the campaign that he would find a peaceful solution.

As he geared up for reelection in 1972, the increasingly paranoid Nixon became obsessed with victory at all costs. He raised tens of millions of dollars for the effort from corporate America, an unprecedented sum at the time. With some of that cash, he financed his own domestic spying operation headquartered out of the basement of the White House. Among the antics of the so-called “Plumbers” was to break into the office of the psychiatrist who was treating Pentagon Papers whistleblower Daniel Ellsberg. They then decided to get really cute, and on June 17, 1972, led by ex-FBI agent and all around maniac G. Gordon Liddy, broke into Democratic Party campaign headquarters at the Watergate Hotel in Washington.

During that campaign, Nixon’s opponent was Senator George McGovern, the last true progressive to win the nomination of one of the two major parties. In addition to being a World War Two veteran, McGovern was a fundamentally decent man who was motivated to run in the first place by his passionate opposition to the Vietnam War. On economic issues, McGovern stood far to the left of Nixon, and was a strong advocate for the poor in the best tradition of the New Deal and Great Society. Beyond ending the Vietnam War, he also proposed a whopping 37% reduction in Pentagon spending. Now THAT was change you could believe in, the American electorate has not had such a clearly defined choice in any election since that year.

Nixon clearly represented the worst excesses of postwar America, while McGovern tried to defeat him by appealing to what Lincoln once called, “the better angels of our nature.” Of course, we all know what happened next. Nixon won reelection with more than 61% of the vote, meaning that nearly two-thirds of all Americans who showed up at the polls supported a figure with a long reputation as a political hatchet man who had not ended the divisive war he had promised he would end. Nixon successfully convinced millions of working and middle class voters that the hippies and the civil rights marchers were a greater threat than the big corporations that had underwritten his reelection effort.

Nixon’s resounding victory set the stage for the election of Ronald Reagan in 1980 with the support of many of those same working and middle class voters. It was Reagan, serving as corporate America’s first hand puppet president, who ratcheted up the class warfare by the financial elites that is reaching its zenith today under a Democratic president who is raising so much corporate cash for his own reelection effort it would have made even Tricky Dick blush.

Nixon was ultimately done in by his own hubris, and the Watergate scandal utterly consumed his presidency before his second term was even half over. Back then, the political system was still functioning as it should, and there was still this quaint notion that no person, not even the president, is above the law. That ideal was upheld when Nixon was forced to resign in 1974, much to the chagrin of two young Nixon aides named Dick Cheney and Donald Rumsfeld, who vowed that such an usurpation of executive power would never happen again. Thirty years later, they and their neoconservative fellow travelers completed the effective destruction of American representative democracy under George W. Bush.

America today finds itself rapidly approaching the endgame of four decades of disastrous economic and foreign policies that have hollowed out the nation’s public finances and are now destroying the working and middle classes. It’s been a long, strange trip, indeed, since the days when Tricky Dick politically kneecapped his genteel rival from South Dakota. During the 1972 campaign, in the first instance of what would become a distressingly familiar pattern, the electorate decided to trade, in the immortal words of Benjamin Franklin, “a little liberty for a little safety.” In the long run, just as Franklin predicted, they have actually gotten neither.
Posted by Bill Hicks at 8:25 AM