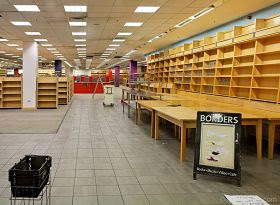 Yesterday, Reuters reported that the Borders bookstore chain has succumbed to the inevitable and will now be liquidating its 400 remaining stores. Not incidentally, 10,700 employees will now be cast out into the worst jobs downturn since the Great Depression. No doubt, huge flocks of mindless consumer vultures will descend upon the remaining stores when the bankruptcy sales begin to pick over the carcass, just like they did during the first go-round of store closings last March.

Go on, you just GOTTA get that 30% discount on those Harry Potter and Twilight novels. Ignore the poor guy behind the counter ringing them up who will be facing financial destitution in just a few weeks. Consume, consume, consume and the consequences be damned. That’s the AMERICAN way.

While I feel bad for the employees, I will not particularly miss Borders the company. I’m an avid reader who owns over 1000 books, but only a very few of them were ever purchased there. Borders and its stronger competitor, Barnes & Nobel, were responsible for driving most of the independent booksellers around the country out of business during the past 30 years. And not because they had better prices either—they didn’t. I guess it must have been because they had larger and glitzier stores, for if there’s one thing American shopper zombies love almost as much as a sale, its glitz.

Here in the DC-area the big local retailer was Olsson’s Books, a homegrown chain that had a cadre of loyal employees, some of whom worked for the company for 20 years or more. They had great customer service, an actual sense of community and I always made sure to purchase my books there whenever I could. Fat lot of good it did for them in the end. After closing individual locations one by one starting in the middle of this past decade, the company finally went under completely just a couple of years ago.

Ironically, after helping to devour Olsson’s the predatory Borders was ultimately done in by an even bigger, leaner and meaner predator, Amazon.com. Amazon not only features the convenience of online shopping and cheaper prices, but best of all it has expertly wriggled around the law to avoid having to charge sales tax.

What’s not to like? Except for, you know, another empty storefront at the local mall and longer lines at the unemployment office. Oh, and an insolvent state government that is now raising your taxes in other areas to make up for what the scofflaw Amazon refuses to charge.

The question that never seems to get asked whenever a story like this appears is, what happens when Internet shopping has finally destroyed so many American jobs that hardly anyone can afford to buy what’s being offered online? That’s the endgame our economy is slowly sliding towards even without the rampaging economic effects of Peak Oil and resource depletion.

But hey, bargain hunters; don’t worry yourselves about all of that depressing stuff. As the Reuters article went on to report:

The liquidation is expected to start for some stores and facilities as soon as Friday, July 22, and will conclude by September, the company said.

So make sure you get there early on Friday, so you can force your way in line ahead of the other massed hordes and get the good stuff before its all gone. That’s the AMERICAN way.
Posted by Bill Hicks at 6:29 AM