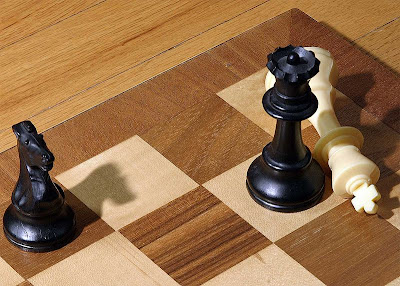 The financial world was stunned today with the news that U.S. GDP figures for the first quarter of 2011 were revised all the way down to a shocking 0.4%, while second quarter GDP came in at a very anemic 1.3%. While some may take cold comfort that we have not technically entered the dreaded “double dip” recession, given the insane amounts of federal deficit spending needed to sustain these numbers, they are in fact an absolute catastrophe.

Lost in all of the political posturing over raising the debt ceiling is the fact that since the financial crash of 2008 and the government’s huge increase in spending to combat it, deficits have been running at a level of approximately 10% of annual GDP. Remove that 10% that’s being borrowed from the future and the economy is actually contracting at Great Depression levels.

What this means is that in every way; economically, politically and, yes, even morally, America has reached the moment of checkmate after 30 years of reckless fiscal policies that started with the election of Ronald Reagan in 1980. Our so-called “leaders” of both parties have been “kicking the can down the road” for so long that they are mystified that their latest and largest kick only lasted for a couple of years, and further kicking will actually bear more resemblance to the wild thrashing of a drowning man.

We now face four possible choices, all of which are very bad:

1). Raise the debt ceiling and greatly INCREASE deficit spending in an effort to “restart” economic growth. This is the choice preferred by mainstream liberals and represents classic Keynesian economic theory. Down this road lays a fast dollar collapse, hyperinflation, and economic ruin probably within a year or two.

2). Raise the debt ceiling and MAINTAIN current levels of deficit spending. This would probably be Obama’s first choice to get him past Election Day 2012. This option would achieve results similar to those above, but it would take a little longer to get to hyperinflation and economic ruin, most likely at some point in Obama’s second term.

3). Raise the debt ceiling and CUT current levels of deficit spending. Whether achieved by spending cuts that the Republicans want or tax increases as the Democrats want, or a combination of the two, this strategy would represent the last and best attempt to kick the can a little further down the road. This strategy would no doubt shortly have to be followed by additional cuts/tax increases, and then still more shortly after that, and so on and so forth. Assuming that the government is able to control civil unrest and disorder, this might buy us a continued slow crash for another decade or so.

4). DON’T raise the debt ceiling and BALANCE the federal budget. This strategy would mean an instant 10% contraction in GDP, credit drying up, tens of millions being laid off and instantaneous political instability and massive civil unrest and violence. Those who advocate for this scenario do not seem to realize just how bad a shock it would be to a population; from welfare mothers, to social security recipients, to defense contractors, to the biggest corporations; that has become thoroughly dependent on federal largess for their very survival. I have grave doubts that the U.S. would survive as a political entity for very long under this option absent the rise of a truly authoritarian regime and the loss of basic freedoms for just about everybody.

And that’s it. Pick your poison, because none of those options look very good to this writer. For 30 years, our so called “leaders” have been playing a gigantic chess match with reality and steadily sacrificing their pieces to keep the game going. Now they are down to just their King, and reality is closing in for the kill. We have, in fact, reached our “Checkmate Moment.”
Posted by Bill Hicks at 10:01 AM